The United States designated a state prosecutor in Bosnia and Herzegovina (BiH) on Monday, describing her as a “brazenly corrupt” and having “links to criminal organizations.” 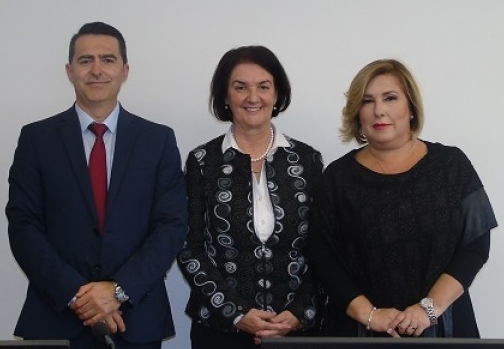 Acting Bosnia and Herzegovina's Chief Prosecutor Milanko Kajganić (L) with his ex-chief, U.S. designated prosecutor Gordana Tadić (C) and his colleague, freshly designated prosecutor Diana Kajmaković (R). (Photo: The Prosecutor's Office of Bosnia and Herzegovina)Diana Kajmaković will not be able to enter the United States and her properties there - if she has any - will be blocked. The U.S. sees her as “responsible for or complicit in corruption or the undermining of democratic processes or institutions in the Western Balkans,” the Treasury Department said in a statement.

“In support of narcotics traffickers and other criminals, Kajmaković helped hide evidence, prevent prosecution, and otherwise assist criminal activity in exchange for personal gain. She also attempted to block an investigation into her apparent criminal affiliates,” read the statement.

Under Secretary of the Treasury for Terrorism and Financial Intelligence Brian E. Nelson said that the latest designation reinforces the U.S. “commitment to a stable and prosperous BiH by targeting an individual who has played a central role in enabling corruption in the country.”

Earlier this year, Kajmaković was a member of a team that was investigating Sky and Anom, apps that were widely used by criminal networks for encrypted communication. After her name was captured in several exchanges, she was booted from the team in April.

Kajmaković also served as head of the department in charge of corruption cases within the Prosecutor’s Office of Bosnia and Herzegovina, but was redeployed to the War Crimes Department in August, following the Sky app allegations, local media reported back then.

Explaining the reasons for the sanction, U.S. authorities said that as part of a bigger crackdown on organized crime and drugs trafficking in the country, BiH investigators had reviewed private communications made via encrypted messaging apps.

The Treasury Department added that criminals referenced Kajmaković, who worked on several of the investigations into these activities, in these encrypted conversations.

Acting Chief Prosecutor of the Prosecutor’s Office of Bosnia and Herzegovina, Milanko Kajganić, said that a case was already formed to investigate Kajmaković’s alleged involvement in criminal activities.

Media in Bosnia and Herzegovina quoted Kajganić as saying that a team of prosecutors, Kajmaković’s colleagues, have been checking her possible links with the criminal groups and their activities.

The U.S. Treasury Department reminds that in Bosnia and Herzegovina, a country with one of the most complicated political systems in the world, “the BiH State Prosecutor’s Office was established with a number of objectives including ensuring respect for human rights and the rule of law in the country.”

“Its work is carried out according to the constitution and laws of BiH and requires that prosecutors perform their duties without favor, bias, or prejudice,” read the statement and concluded that “the independence of the BiH judicial system is a prerequisite to the rule of law.”

“Tadić was (also) designated pursuant to E.O. 14033 for being responsible for or complicit in, or for having directly or indirectly engaged in, actions or policies that undermine democratic processes or institutions in the Western Balkans,” according to the Treasury Department.

Bosnia and Herzegovina’s High Judicial and Prosecutorial Council (HJPC), a body in charge of ensuring an independent, impartial and professional judiciary in the country and also for appointing, disciplining or removing judges or prosecutors, in 2021 officially removed Tadić from her position “following her failure to assign cases to prosecutors through an automated case distribution system designed to prevent prosecutor assignment decisions based on personal or political reasons.”

In 2017, HJPC also removed Tadić’s predecessor, Chief Prosecutor Goran Salihović, for “deliberately providing false, misleading or insufficient information in connection with job applications, disciplinary matters, issues of promotion and advancement in the service or any other issues that are within the competence of the HJPC.”