The office of the Georgian ombudsman asked on Tuesday the European Court of Human Rights to prioritize the lawsuits filed by Georgians over the latest surveillance scandal that erupted when a TV station aired leaked videos that showed to what extent politicians, journalists and activists were spied on. 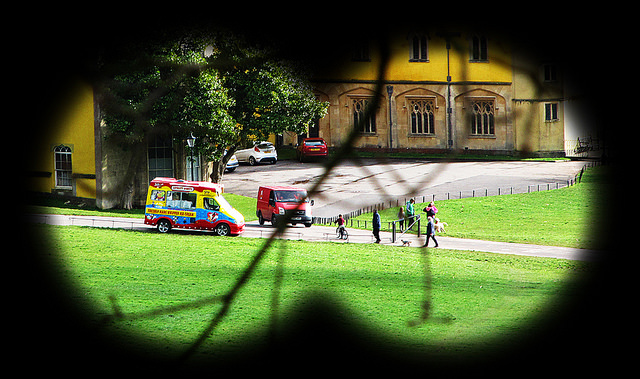 Georgian authorities called on the European Court of Human Rights to prioritize the lawsuits filed by Georgians over the latest surveillance scandal. (Photo: Andrew Gustar/Global Panorama, Flickr, License)The opposition-friendly TV Pirveli' released video, audio and photos over the weekend that offered detailed information about the public and private life of members of the ruling as well as opposition parties, individuals working for NGOs, journalists and producers, showing them visiting doctors, funerals, and other movements as well as displaying their posts on closed Facebook groups.

Operatives can be heard discussing how not to be detected by the victims and how to document their moves.

"Let's dress casually so we don't get caught," one says. "Take a picture of the car so that the numbers are visible and then we will be able to identify it."

TV Pirveli reporters claimed that they have identified the operatives who were embedded in different political parties.

But everyone in Georgia seems to have seen the program, except the country’s prosecutors.

“There was no reaction from the prosecutor's office,” Nodar Meladze, the author and presenter of the program told OCCRP. The material the station received covers the years 2020 and 2021.

“Several days have passed since the material was released. The law obliges the prosecutor's office to investigate it,” said Saba Buadze from oppositional party "Lelo." He went with his colleague to the office of the public prosecutor to request an investigation into the illegal surveillance of them and their party leader.

"We have a million sources in the “Lelo Party,' one operative can be heard complaining to someone on the phone. They are presenting their candidates today and none of us is attending? Why don’t we have any pictures or SMS messages from inside?” he can be heard saying.

“We should monitor this thing from afar. We can control the arrival and departure of Khatia from very far away,” one of the voices in the recordings says, referring to Khatia Dekanoidze, a former top-level politician in both Georgia and Ukraine.

According to Dekanoidze, this is the third time she has been spied on that she knows of. And it’s the most shocking one, she claims.

“They know about everything I do,” she told OCCRP. “Starting with the communication with my mom, my health problems that even my family members did not know about.”

Dekanoidze reported the surveillance to the prosecutor’s office in July, after the second time she learned about it, but so far she did not even receive a victim status yet.

Politicians from the ruling party “Georgian Dream - Democratic Georgia" said they don’t believe that the released material has been gathered by the Georgian State Security Service and consider it fake all together.

“The media controlled by the opposition is deliberately trying to discredit the State Security Service and law enforcement structures,” said Archil Talakvadze,  the deputy chairman of the parliament of Georgia and member of the ruling party.

“Unfortunately, we are used to huge amounts of misinformation, which has further increased in the last few months,” said Shalva Papuashvili, charment of the parliament of Georgia and also member of the ruling party.

The State Security Service, however, has not denied the accusations about the illegal surveillance and neither has it denied that the people mentioned by journalists as being operatives are not working for the institution.