Colombian authorities said they arrested ten alleged leaders of “Los Maracuchos” criminal group, who engaged in a series of deaths of rivals and personal vendettas in Bogotá city since early this year, leaving at least 23 bodies inside plastic bags lying on the streets. 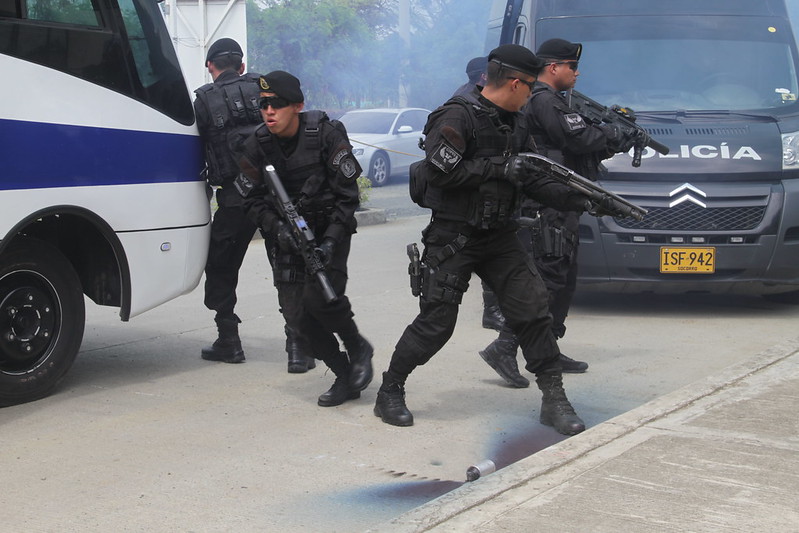 Colombian police arrested ten alleged leaders of “Los Maracuchos”. (Photo: Policía Nacional de los colombianos, Flickr, License)The operation dubbed “Job” jailed the leader of the group, alias “Leo,” and other nine suspects linked to the gang. Los Maracuchos was under investigation for several months for involvement in everything from drug trafficking to homicide, robberies, contraband, arms trafficking. Much of the alleged drug trafficking occurred near brothels in Santa Fe.

The group is believed to have made nearly US$100,000 a month through illicit activities. It is described as a smaller group of Venezuelans and Colombians operating out of Bogotá city for about three years, but it is known for its extremely violent behavior and involvement in several illicit economies.

Homicides was a weapon to gain and maintain territorial control and dominance of crime on the streets, as well as to raise fear among shopkeepers who did not align themselves with criminal activities of the group.

“We have committed ourselves to Bogotá and to clarify crimes, to find those responsible and to bring them before justice,” the mayor of Bogotá Claudia López Hernández said.

She added that Los Maracuchos is one of the three rival criminal groups that has been dismantled. The other group is Tren de Aragua and a third gang is still undercover.

“It is one more example that there are not, nor will there be, territories that are forbidden or co-opted by crime,” the Colombian security secretary Aníbal Fernández de Soto said.

This move is one of the early results of a special counterintelligence group which was created in Bogotá to deal with cases of violence that have frightened several parts of the capital city.

Interpol will help via Blue Notice to locate and arrest other five alleged members of the criminal group who would have fled to Venezuela.