U.S. Ship Seizes $20 Million Worth of Drugs in the Gulf of Oman

The U.S. Coast Guard intercepted a shipping vessel carrying US$20 million worth of narcotics in the Gulf of Oman, the U.S. Navy informed. 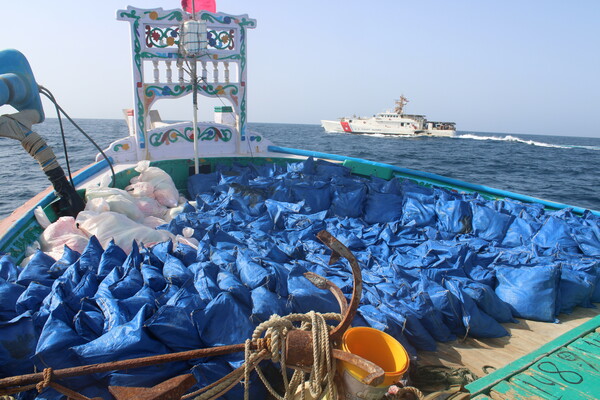 The vessel was carrying 2,980 kg of hashish and 320 kg of amphetamine pills. (Photo: America's Navy, License)The operation amounts to one of the biggest drug busts recorded in the area this year. It was conducted with the collaboration of Saudi Arabia under Combined Marine Forces (CMF) – a coalition of 34 nations who are determined to improve global maritime security.

In particular, the vessel was transporting 2,980 kg of hashish and 320 kg of amphetamine tablets, packed in plastic bags, which were stacked on its deck.

The origin of the narcotics remains unknown. “The analysis is still ongoing. The vessel was unflagged,” Timothy Hawkins, CMF’s Public Affairs Officer, told OCCRP on Thursday.

Hawkins did not comment on where the vessel was heading, adding that the U.S. Navy does not normally release details about its operations.

In 2021, CMF seized a record US$193 million worth of drugs, more than during the previous four years combined, in the Gulf of Oman and Arabian Sea. The U.S. Navy press release attributed the record volume of seizures to increased patrols.

This year, there have been a number of larger-scale drug busts in the Gulf of Oman.

On January 15, for example, the United Kingdom’s Royal Navy seized drugs worth US$26 million. More recently, on May 15, the U.S. Navy intercepted a US$39 million drug shipment.

The vessels tend to smuggle heroin, hashish or amphetamine-type drugs, and are often dispatched from Iran.

Iran, sharing a 900-km porous border with Afghanistan — the world’s largest opium producer — is a prominent drug trafficking hotspot. Over the past decade, it has also developed a strong methamphetamine production capacity.

Alongside drugs, CMF also reports frequent seizures of weapons and ammunition, a significant proportion of which originate in Iran and are believed to be destined for the Houthi rebels in Yemen.