Nine members of the Genovese and Bonanno families - two of the five families which have dominated the Sicilian-American mafia La Cosa Nostra in New York City - have been charged with multiple counts of racketeering, illegal gambling, money laundering and other offenses the U.S. Department of Justice announced last week. 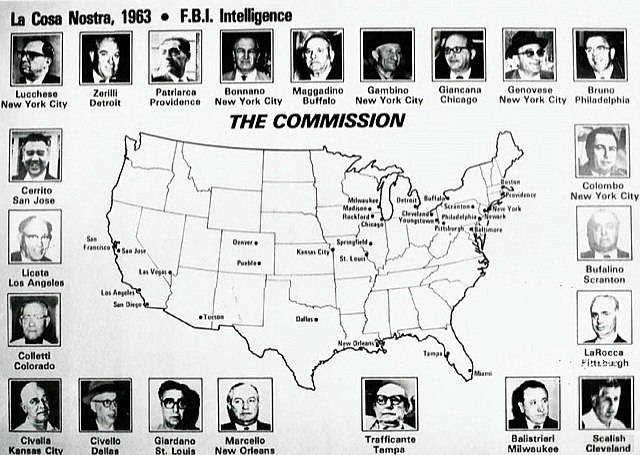 Both Genovese and Bonnano are among the so-called ‘five families’ of La Cosa Nostra, the Sicilian American Mafia in New York. (Photo: FBI, Wikimedia, License)Eight of them were arrested and one is still at large. Among those arrested were two Bonnano captains, soldiers, and associates, Anthony Pipitone, Vito Pipitone, and Agostino Gabriele, as well as Genovese captain, Carmelo Polito, soldier, Joseph Macario, and associates Salvatore Rubino and Joseph Rutigliano.

Also charged was Hector Rosario, a detective with the Nassau County Police Department, who allegedly took bribes from the Bonannos to organize police raids of their competitors.

The group ran their operations out of several fronts in Lynbrook, on Long Island just east of New York city.

“The profits earned through this and other gambling locations generated substantial revenue, which was then laundered through cash transfers to the defendants and through “kicking up” to the crime families’ leaders.” the DOJ added.

Both Genovese and Bonnano are among the so-called ‘Five Families’ of La Cosa Nostra in New York, which have dominated the city's underworld since the age of immigration in the early 20th century.

The Genovese family was established in the 1930’s by Charles “Lucky” Luciano, the godfather of the American mob who rose to prominence during the prohibition era and established ‘The Commission,’ the loose ruling body which delineated territory and created the current hierarchy of the Italian-American Mob.

The Bonnano family’s’ history stretches back even farther to the organization of Salvatore Maranzano, a member of the Sicilian-born traditionalist old-guard known as “Mustache petes” who were ultimately toppled by Luciano and his younger, more americanized, compatriots in the 1930s after the so-called Castellammarese war.

With Maranzano’s assassination in 1931, his empire fell under the control of Joseph “Joe Bananas” Bonanno, and the organization has kept the name ever since.

“Today’s arrests of members from two La Cosa Nostra crime families demonstrate that the mafia continues to pollute our communities with illegal gambling, extortion, and violence while using our financial system in service to their criminal schemes,” said U.S. Attorney Peace.  “The defendants tried to hide their criminal activity by operating from behind the cover of a coffee bar, a soccer club, and a shoe repair shop, but our Office and our law enforcement partners exposed their illegal operations.

“Even more disturbing is the shameful conduct of a detective who betrayed his oath of office and the honest men and women of the Nassau County Police Department when he allegedly aligned himself with criminals,” Peace added.