Genoans organized a sit-in demonstration in front of the Prefecture of Genoa on Sunday, joining over a thousand people in Milan who organized last week the first ever protests against Italy’s biggest mafia, the ‘Ndrangheta. 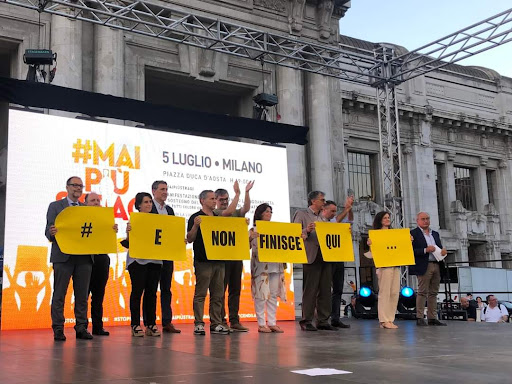 Officials take to stage outside Milan’s Central Station in Italy’s first ever protest against the ‘Ndrangheta. (Photo: Maria Seminara, GOEL Cooperative Group)Fed up with the Calabria-rooted mafia, about 1,500 people gathered outside the Central Station in Milan on Tuesday to express support for prosecutor Nicola Gratteri, the Attorney of the DDA of Catanzaro who has been on the forefront of a lifelong battle with the ‘Ndrangheta.

The public outcry was also triggered when an attack on Nicola Gratteri’s life was discovered two months ago.

“Do not touch Gratteri,” the crowd chanted. “I am with Gratteri,” and “Calabria is our concern” were among the phrases on the public’s lips and banners.

The Milan demonstrations came on the 30th anniversary of the massacre of Palermo and the Capaci bombing, when the mafia killed two magistrates, Giovanni Falcone and Paolo Borsellino, alongside a number of escort polices.

“We wish to let ‘Ndrangheta understand that Prosecutor Gratteri and every one else engaged with their job in the fight against mafias are not alone,” Maria Seminara of the GOEL Cooperative Group, a non-profit organization looking to delegitimize the Calabrian mafia, told OCCRP. Her organization took part in putting together last week’s protests alongside 150 other organizations.

The solidarity with Gratteri in this historic demonstration is meant to ensure that similar tragedies, as in the Palermo and Capaci massacres, never happen again, she added.

“Demonstrators, along with organizers, come out to demonstrate to show sympathy for those who are at risk in their fight against the mafias and to show that civil society stands as a civil escort for those people,” said Seminara.

‘Ndrangheta is the largest organized crime group in Italy, and one of the most sophisticated globally, renowned for their dominant role in the global drug route, their money laundering, trafficking, and intimidation tactics.

Although the criminal group has a stronghold over the southern province of Calabria, the crowd in Genoa and Milan featured citizens from all over the nation who came to express that the ‘Ndrangheta is not only a local problem, but a concern of Italy and beyond, said Seminara.

“Ndrangheta affects the lives of people everywhere, also outside Calabria, and so it must be addressed as a national emergency,” she added.

A number of public officials including the President of the Parliamentary Commission for Anti-Mafia, the assistant prosecutor of Milano, and the councilor for Social Safety of the Municipality of Milan took notice of the public’s discontent with the mafia and were among the demonstrations’ speakers. Others who took to the stage included journalists, actors, singers, non-profit directors, and the archbishop of Bologna.

Despite the turnout, GOEL Cooperative’s president Vincenzo Linarello is not too optimistic regarding politicians prioritizing to tackle the mafia, however.

“It is a shame that the most powerful mafia in the world, the 'Ndrangheta, continues for decades to exist undisturbed in the Italian state,” said Linarello.

Referencing the targeting of anti-mafia judges, he added “the problem is that by tightening up the laws against the mafia, colluding politicians and entrepreneurs will necessarily be hit. There is a project of enslavement of the judiciary to political power in order that the magistrature does not freely attack corrupt politics."