The government of the West African nation of Gambia on Friday revoked with immediate effect all timber export licenses and banned the felling and import of Pterocarpus erinaceus, known as African rosewood. Experts remain skeptical about how effective this ban will be. 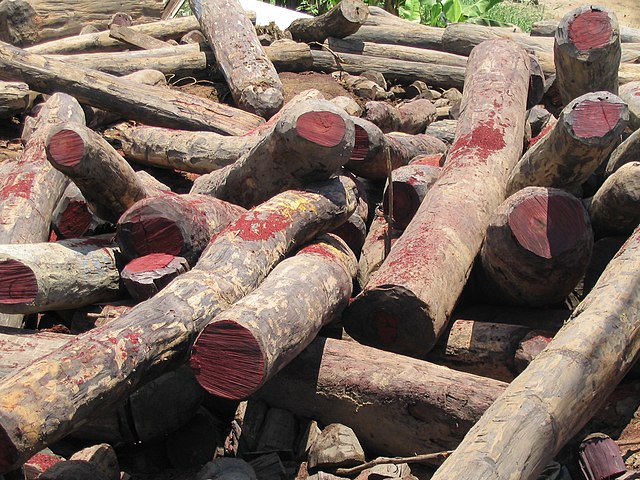 The vast majority of Gambia’s rosewood exports has been smuggled from Senegal. (Photo: Anonymous, Wikimedia, License)“With these new rules, Gambia Ports Authority is hereby instructed to refuse loading for timber logs unto any vessel for export,” a government press release said.

The government did not specify the motivation behind the ban and did not immediately respond to the OCCRP’s request for comment. Nevertheless, the move came amid the progressive destruction of Gambia’s forest cover and intensified international clampdown on the illegal trade in West African rosewood.

Most of the global demand for rosewood comes from China, where it is used to produce antique-style furniture popular among the country’s new rich. Following the depletion of rosewood forests in Southeast Asia around 2010, the epicenter of the rosewood trade moved to West Africa.

Intensive logging drove Gambia’s rosewood population near extinction already in 2012. Yet, the country has continued to feature as one of the largest rosewood exporters to China. According to the Environmental Investigation Agency (EIA), the vast majority of its rosewood exports has been smuggled from neighboring Senegal.

The smuggling network has provided lifeblood to separatists in the region of southern Senegal known as Casamance, who have waged an armed conflict against the Senegalese government. It was established by Gambia’s former president Yahya Jammeh, who is a member of the Jola ethnic group, the key actor in the rebellion.

On June 8, the Convention on International Trade in Endangered Species (CITES) took an unprecedented step and suspended the trade in West African rosewood altogether, citing concerns about its sustainability.

“There has been a lot of pressure piling up on the government, not only from the international community but also from Senegal and civil society actors,” said Omar Malmo Sambou, environmental researcher at the University of Gambia, who spoke to the OCCRP on Monday. “So they thought that the only thing they can really do now is to issue the ban.”

Sambou thinks that the ban was issued only for appearance’s sake, however.

“The Gambian authorities directly engage in the illegal trade. I would call it a criminal enterprise, cutting across different levels of government,” he said. “The confiscated timber is sold afterwards. They also profit from issuing fake export certificates.” The Voice of Gambia has brought an accusation that even current president Adama Barrow is personally involved in illegal timber exports.

According to Sambou, the export ban contains a potential loophole, created by allowing for the continued importation of other woods aside from rosewood. “This way, rosewood can be trucked in, misdeclared as other species,” he said. “It might be the case that they will keep stockpiling the imported woods and then temporarily lift the ban and get everything out. Another possibility is that they will continue the exports secretly.”

Meanwhile, Gambia’s forests have continued to disappear, shrinking by nearly 20% over the past decade. “It’s getting worse by the day. The speed is alarming,” said Sambou. “Because of poverty, people are encroaching into the forests, burning charcoal or collecting wood for sale.”

That said, it seems impossible to assess the extent to which domestic deforestation is linked to the international timber trade, and thus also the potential effects of the export ban. “Because of certification fraud, we can’t tell which timber comes from Senegal and which from Gambia,” explained Sambou.

While the main driving factors of deforestation are population growth and climate change, the problem ultimately comes down to law enforcement, suggested Sambou, “We don't have enough human resource capacity to protect our protected areas.”