Argentinian Authorities Seize Over 1.5 Tonnes of Cocaine Bound for Europe

Argentinian authorities reported Tuesday the execution of a major drug seizure in which multiple houses and sailboats were raided and found to have been trafficking over a tonne and a half of cocaine bound for Europe. 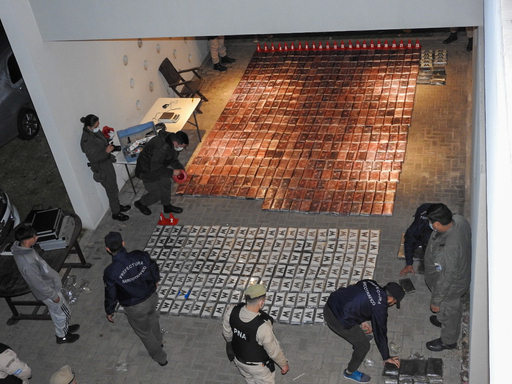 Argentinian authorities reported Tuesday the seizure of over a tonne and a half of cocaine as part of an operation mandated with investigating large-scale drug trafficking activity. (Photo: Argentina.gob.ar, License)In a joint effort dubbed ‘Operation Atlantis,’ National Gendarmerie and Naval Prefecture agents raided three ships at sea and eleven homes in the province of Buenos Aires that were all linked to large-scale drug trafficking activity.

The National Gendarmerie is mandated to conduct major investigations in the interests of Argentina’s domestic security and national defense, while the Naval Prefecture effectively serves as the country’s coast guard.

Since 2018, Atlantis has acted as a counter against transnational drug trafficking organizations as well as their efforts to launder their ill-gotten gains.

The ships made several intermittent stops at residences situated along the banks, where police observed the exchange of multiple large watertight bags.

Immediately afterwards, police reached out to the courts to authorize a series of raids on the residences suspected of being used as safe houses for large quantities of narcotics.

Three houses in the town of Escobar turned up 34 identical watertight bags, in which agents found 800 packages sealed in pink plastic. The contents were positively identified as cocaine with a total weight of just under 900 kilograms.

The major drug seizure triggered another wave of search warrants for raids on locations previously tagged by police.

Agents once again hit the jackpot in a house in the town of Canning, where they seized an additional 660 kilos of cocaine.

Should they have remained in the traffickers’ hands, investigators believe the drugs would have been bound for European markets.

All together, police took over a tonne and a half of drugs out of circulation while also seizing large sums of money and logistics equipment used by the traffickers to transport their illicit cargo, which authorities believe will aid them in future Atlantis investigations.