Authorities in Kazakhstan confirmed on Monday that they are investigating claims made by a local businessman who accused the brother of ex-President Nursultan Nazarbayev and one of his unofficial wives of having illegally taken over his share in a mining company. 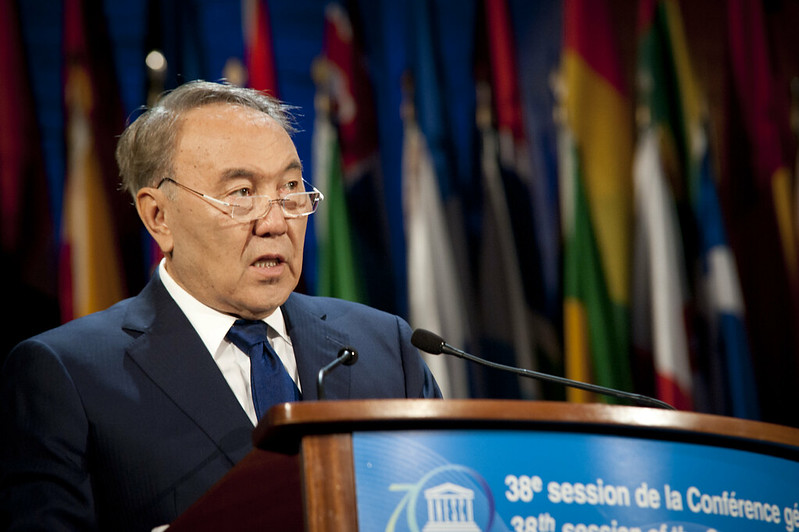 Closest relatives of the Kazakh ex-President Nursultan Nazarbayev involved in corruption. (Photo: UNESCO General Conference, Flickr, License)Businessman Nursha Kakenov submitted his complaint against Bolat Nazarbayev and Maira Kurmangaliyeva on June 17 to the country’s Agency for Financial Monitoring but the agency has refused to provide any details about the probe.

Nursultan Nazarbayev, 81, ruled the former Soviet country since its independence in 1991 until he resigned in 2019 and handpicked his successor but remained in power behind the scene.

Nazarbayev was the focus of Kazakh’s anger that was sparked at the beginning of this year by the rise of fuel prices and that turned violent. His family is believed to control much of the country’s economy.

Kazakh journalist Mikhail Kozachkov wrote on Monday that Kakenov accused Bolat Nazarbayev and Kurmangaliyeva of illegally taking over his share in the mining company Karuan, where Bolat served as general director for a few years. The businessman claimed he had lost about US$150 million this way.

Bolat Nazarbayev is the fourth member of the ex-president’s family being investigated for corruption or misuse of power after the January unrest that allowed current president Kassym-Jomart Tokayev to take full control over the country from Nursultan Nazarbayev.

In March, law enforcement agencies arrested Nazarbayev’s nephew Kairat Satybaldy and his former wife Gulmira Satybaldy. Both were accused of financial crimes, including the illegal takeover of a business.

Later that month, the Agency of Financial Monitoring arrested Kairat Boranbayev, an oligarch from the Forbes list, whose daughter was married to Nazarbayev’s grandson. All three remain in detention.

Bolat Nazarbayev, known for his love of magnificent festivities, has been a prominent businessman since the early 1990s. He controlled the biggest markets in the former capital of Almaty, construction, trade and mining companies. Some sources named him as an “unofficial controller” of the trade on the border between Kazakhstan and China. In the early 2000s he was a member of the board of Kazakhmys, a giant mining corporation.

Since the unrest in January, Bolat Nazarbayev never appeared in public and a few of his companies changed their official owners.

While citizens of Kazakhstan can be married to only one person at a time, Bolat Nazarbayev was most likely married to three women at the same time, including Maira Kurmangaliyeva. The couple has one son.