The Mexican navy is investigating a large theft of military equipment, including uniforms, body armor and other paraphernalia, which is intended to be sold to powerful cartels who could then use it to impersonate the military, the navy’s secretary general revealed in a press conference. 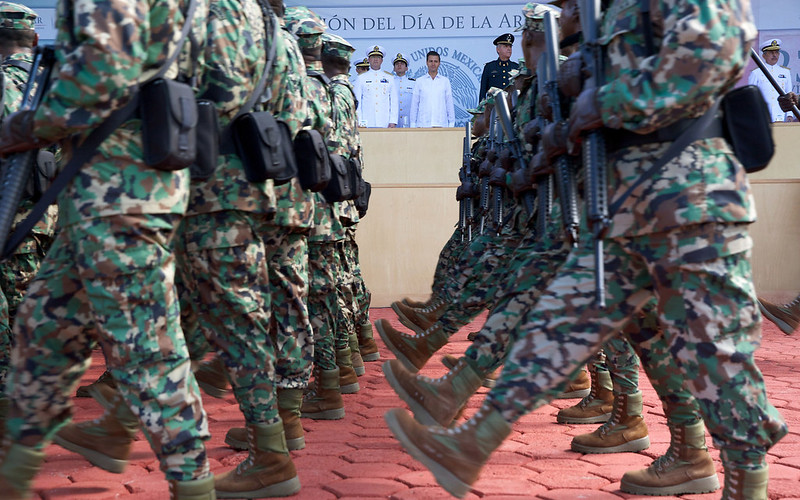 The use of tactical gear, such as bullet proof vests and other protective equipment by the cartels has sky-rocketed in recent years. (Photo: Presidencia de la República Mexicana, Flickr, License)The goods are believed to have been stolen by active military members.

“We have detected within our institution elements that have stolen gear, especially uniforms, and sold them to organized crime groups, but fortunately, our counterintelligence has detected them and we have discharged them,” Admiral José Rafael Ojeda Durán said.

The use of tactical gear, such as bullet proof vests and other protective equipment, by the cartels has sky-rocketed in recent years, allowing the cartels to match and even surpass the firepower of law enforcement.

Just this week, ten heavily armed cartel members were killed after initiating a firefight with police in the town of Texcaltitlan.

“Currently, there are many places where tactical equipment is sold, from knee protection, elbow protection, back protection, everything that at some point, military or naval personnel need but can also be used by organized crime members. These things are found for sale in many stores,” Luis Cresencio Sandoval, the Secretary of National Defense, said according to Riviera Maya News.

In march, Mexican authorities seized a massive amount of high powered weapons and tactical equipment from the hands of the Sinaloa cartel.

According to a statement from the Mexican defense ministry, it included more than two million rounds of munitions, 128 long guns, 38 small arms, 19 machine guns as well as 100 ballistic plates used in body armor and 12 tactical vests.