The European Union announced on Friday sanctions against a controversial Serbian businessman and politician, citing his close ties with the regime of Belarus President Alexander Lukashenko. 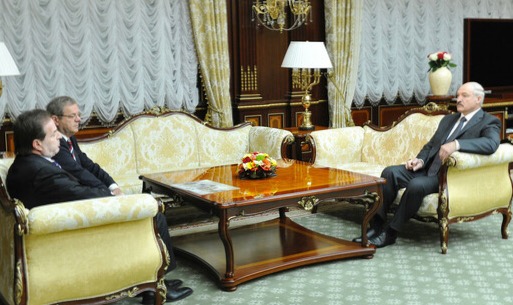 Karić brothers, Bogoljub (L) and Dragomir (C-L) with Belarus President Lukashenko (R) in Minsk in 2015. (Photo: President of the Republic of Belarus, License)Bogoljub Karić’s name was added to the list of numerous individuals and entities sanctioned for supporting the Belarusian government, itself already designated for its support of the Russian invasion of Ukraine.

“Together with his family members, he developed a network of real estate companies in Belarus and has cultivated a network of contacts with the family of Alexander Lukashenko,” read the EU decision.

The EU noticed that “in particular, he has been closely associated with Dana Holdings and its former subsidiary Dana Astra, and he reportedly represented those entities during meetings with Lukashenko.”

As a result of their strong links with Lukashenko and his entourage, companies affiliated with Karić obtained special treatment from the Minsk administration, including tax incentives and parcels of land for real estate development, according to the EU authorities.

Karić expressed surprise at the sanctions and said that he will challenge them legally.

OCCRP and its partners – Belarus Belsat and Serbian KRIK – published an investigation a year ago revealing that Lukashenko had handed about US$1 billion worth of prime real estate in Minsk to construction companies linked to the Karić family.

Several firms, all under the umbrella of the Karić family’s Cyprus-registered Dana Holdings corporation, got massive tax incentives and public resources in Belarus to fund the building, and were handed free land in the Belarus capital Minsk by a presidential order. The ambitious building projects have never actually materialized.

However, Bogoljub Karić is not the only Serbian added to the latest EU blacklist.

The new queen of fertilizers, Belgrade-born Aleksandra Melnichenko, was listed after her husband – Russian billionaire Andrey Melnichenko, owner of the major fertilizer producer EuroChem Group and the coal company SUEK – transferred his property to her in an attempt to avoid international sanctions against him.

The former Serbian model and singer replaced in March her husband “as the beneficial owner of Firstline Trust, managed by Linetrust PTC Ltd, a company which represents the ultimate owner of EuroChem Group.”

“Therefore, she is associated with a leading businessperson involved in economic sectors providing a substantial source of revenue to the Government of the Russian Federation, which is responsible for the annexation of Crimea and the destabilization of Ukraine,” according to the EU document.

The EU also claims that Aleksandra’s husband Andrey is “supporting or implementing actions or policies which undermine or threaten the territorial integrity, sovereignty and independence of Ukraine, as well as stability and security in Ukraine.”