In order to throw a wrench into the Russian war machine’s advances, the United Kingdom, the United States and their European allies imposed a broad range of new sanctions across various sectors, with talks of halting all future oil imports to the EU in the works as well. 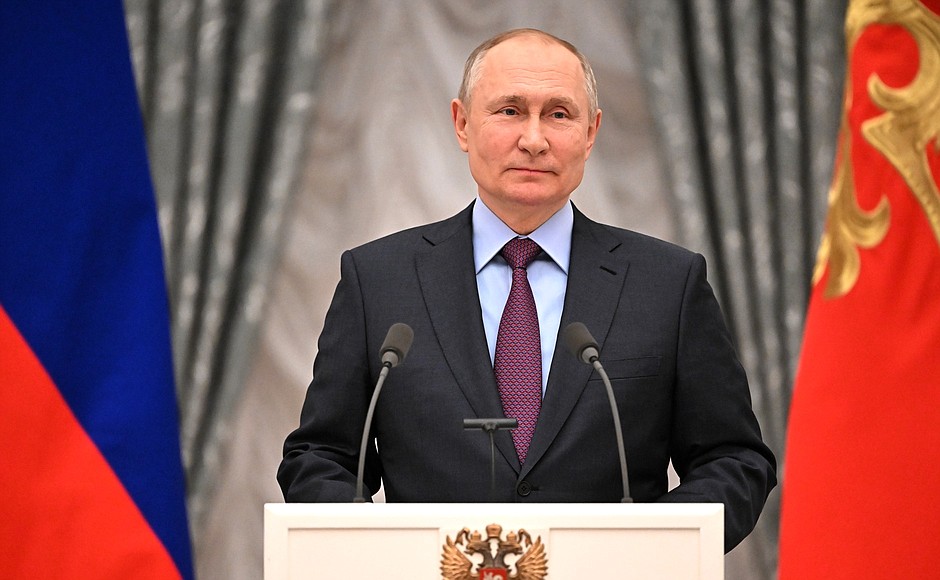 The U.S.A., U.K. and the European Union continues with the sanctions against Russia. (Photo: President of Russia/Kremlin.ru, License)London unveiled on Monday a new round of sanctions and tariffs worth 1.7 billion pounds (US$2.1 billion) that target key materials used to sustain the Russian war machine.

Listed amongst the goods subjected to a tariff hike include palladium and platinum, of which the U.K. is a principal importer from Russia. The total 1.4 billion pounds ($1.7 billion) worth of tariffs are intended to put a hole in the bottom of Putin’s war chest.

“We are determined to do our utmost to thwart Putin’s aims in Ukraine and undermine his illegal invasion, which has seen barbaric acts perpetrated against the Ukrainian people,” said Anne-Marie Trevelyan, Secretary of State for International Trade.

This marks the third wave of sanctions imposed by the British government since the onset of the war, which has now placed restrictions on more than 96% of Russian imports as well as 60% of U.K. exports.

Simultaneously, the U.S. imposed a ban on Russian banks and media networks, in addition to levying sanctions against dozens of executives who generate significant revenue for the Kremlin.

The goal behind these sanctions is also to coerce Russia into realizing that any future strategic objectives in Ukraine are entirely unfeasible, force Russian President Vladimir Putin back to the negotiating table and ultimately have him issue a full withdrawal of his military forces.

“Today we are further constricting Russia’s economy and access to services and technology it needs to conduct this unprovoked invasion,” said Secretary of the Treasury Janet L. Yellen. “We are also targeting Putin’s ability to generate revenue that enables his aggression, as well as entities and their leaders who support his destructive actions.”

Listed amongst those now sanctioned are eight executives at already sanctioned Sberbank, Russia’s largest financial institution and a key asset to the viability of the country’s economy, as it holds a third of all its bank assets.

Also targeted were 27 individuals on the Board of Directors at Gazprombank, the country’s third largest bank that manages the financial needs of the Russian-state controlled Gazprom, one of the largest natural gas exporters in the world.

Russia’s energy sector has suffered heavy losses in the three months following the onset of the invasion. Until now, however, U.S. companies were still permitted to offer Gazprombank financial advice or otherwise engage in business with the energy giant, something which the American government has now outlawed.

Russia’s media sector, meanwhile, has faced accusations of disseminating disinformation and outright lies on the ongoing invasion in order to portray Russian forces in a positive light and confuse the public into thinking that they are liberating Ukraine from an oppressive Nazi regime.

This is although Ukrainian President Volodymyr Zelensky is of the Jewish faith and in fact became the world’s only Jewish head of state—outside of Israel—at the time of his election in 2019.

Apart from the obvious intent to punish Russia’s state-controlled media for lying to its audiences about the invasion, the U.S. also targeted Channel One Russia, Television Station Russia-1, and the NTV Broadcasting Company because of the large amounts of advertising revenue that they receive from foreign bodies.

This revenue, the White House noted, fed back into the Kremlin.

These measures by the U.S. government run in line with its European partners, who last week discussed plans to phase out their collective dependency on Russian oil.

Ursula von der Leyen, President of the European Commission, called for “a complete import ban on all Russian oil” as well as further sanctions against Russia's news and finance sectors.

If the EU follows through, it will show its resolve to unify against Russian aggression, despite the certainty of rising energy costs.

Whereas states like France have largely transitioned to nuclear power, others like Italy and Germany still import a considerable portion of their energy from Russian gas lines.

In spite of this, von der Leyen asserted to her colleagues in Strasbourg that “Putin must pay a high price for his brutal aggression.”

At a Victory Day celebration in Moscow’s Red Square on Monday, Putin addressed the world and spoke of Russia’s commitment to peace.

“Russia has always supported an equal global system of security,” he said. “We’ve tried to pursue security talks with honest dialogue. Everything was in vain.”

Putin went on to accuse NATO of plotting to invade Russia and asserted that the reason his forces crossed into Ukraine was to combat a U.S.-backed Nazi movement in the country.

Western intelligence and military experts have commented that the Russian president had hoped to have seized all of Ukraine by now and that he was not expecting such a unified international response against his risky gamble.

But now, in response to the thousands of sanctions against Russia and the overwhelming amount of military and humanitarian aid flowing into Ukraine, there are talks that not only has Putin fallen short, but that his plans have entirely backfired and turned his country into a global pariah.