An unknown man threatened a prominent Azerbaijani journalist with a knife and ordered her to stop reporting about a controversial murder trial she had been covering. 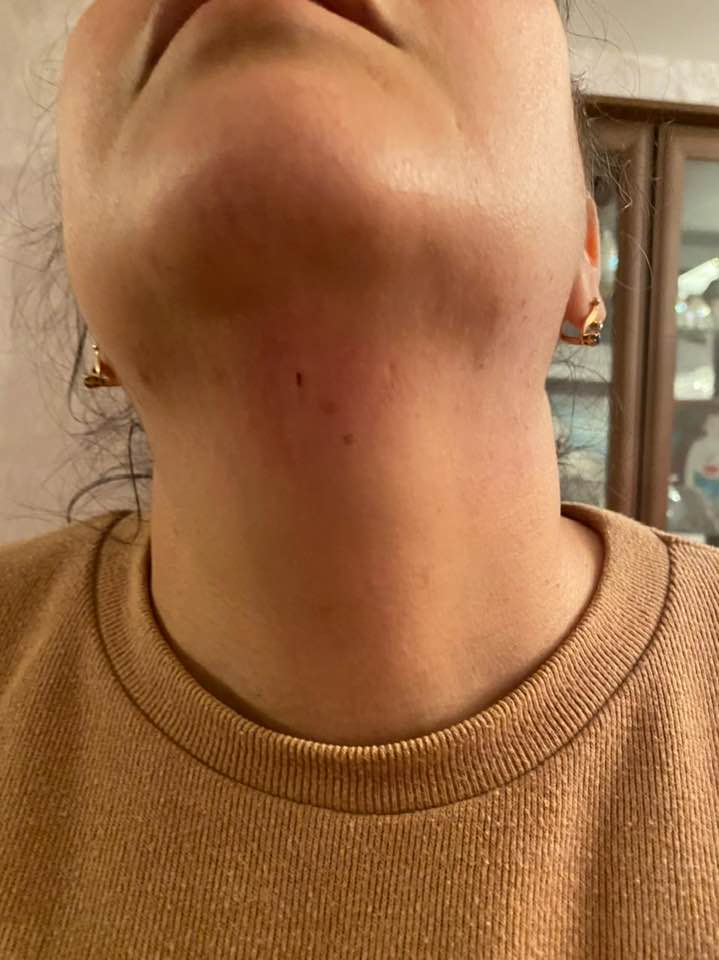 Mammadova shows marks the knife left on her neck. (Photo: Aynur Elgunesh/Facebook, License)Aytan Mammadova has been reporting about controversial trials for years. She said that she believes the attack was related to the trial of a suspect accused of brutally murdering 10-year-old Narmin Guliyeva in 2019.

Guliyeva was kidnaped in her village in the northwestern region of Tovuz and found dead 47 days later. According to investigators, the burnt body was found in January 2020, just a few days after Azerbaijan’s President Ilham Aliyev instructed police to find the girl as soon as possible.

Authorities quickly accused and arrested neighbor Ilkin Suleymanov, 49, who first denied the crime but then confessed, later claiming that he was tortured into signig the confession.

Mammadova has been covering his trial extensively, reporting about every controversy and inconsistency which led to the conclusion that Suleymanov was innocent and the trial was unfair.

As she entered the elevator in her building on Sunday, a middle-aged man stepped in too and put a knife against her throat. He ordered her to stop writing about the case.

She told Radio Liberty’s Azerbaijani service that she thinks he referred to the Suleymanov case and that there are certain forces who don’t want the truth about it out. She also stressed that she received a threatening phone call 20 days ago related to the same case.

“The knife cut my throat. Then he took the knife away and then put it against my throat once more,” she told Voice of America.

“You haven't wised up, have you?" he asked me. The man then threatened to hurt her daughter who was at home at the time.

The Ministry of Internal Affairs said that an investigation has been launched.

Azerbaijani journalists, human rights defenders and activists signed an appeal addressed to the president, the head of State Security, the minister of interior and the prosecutor general, demanding the attacker to be found and punished as soon as possible.