For the first time ever, the Office of the Prosecutor of the International Criminal Court (ICC) will join a Eurojust joint investigation team, JIT, which was formed to probe whether genocide, crimes against humanity and war crimes have been commited in Ukraine. 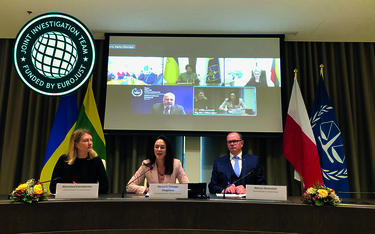 Eurojust will support work of the ICC's Office of the Prosecutor and General Prosecutors of Lithuania, Poland and Ukraine in investigating and documenting war crimes and crimes against humanity in Ukraine - consequences of the Russian invasion of that country. (Photo: EUROJUST, Twitter, License)The JIT was set up with Eurojust support on 25 March by Lithuania, Poland and Ukraine and aims to “facilitate investigations and prosecutions in the concerned states as well as those that could be taken forward before the ICC,” Eurojust said in a statement on Monday.

ICC Prosecutor Karim A.A. Khan QC and the prosecutors general of the three countries involved formed the JIT and sent a clear message that all efforts will be made to effectively gather evidence on core international crimes committed in Ukraine and bring those responsible to justice, according to the statement.

The JIT should make investigations and international judicial collaboration easier.

“The Ukraine situation, in particular, demands collective action so as to secure relevant evidence and ultimately ensure its effective use in criminal proceedings,” ICC Prosecutor, Karim A.A. Khan QC, said.

He stressed that his office, through its participation in the JIT, will significantly enhance its ability to access and collect information relevant to its independent investigations.

However, he underlined that the ICC participation in the JIT “will not be a one-way street.”

“We do not wish to only be the recipients of information and evidence. We also want to serve as an effective partner with respect to the conduct of domestic proceedings in relation to core international crimes, in line with the principle of complementarity,” said Khan QC.

Because Eurojust’s legal framework currently does not allow it to collect, preserve, analyze, and share evidence relating to core international crimes, nor to directly cooperate with the ICC in this regard, the European Commission proposed amending the Eurojust Regulation to grant the Agency legal authority to collect, retain, and share evidence of war crimes.

National authorities are already gathering evidence of possible crimes committed in Ukraine, but it cannot be safely stored in Ukraine due to the current conflict.

“To ensure accountability for the crimes committed in Ukraine, it is crucial to ensure safe storage of evidence outside Ukraine as well as to support the investigations and prosecutions by various European and international judicial authorities,” the Commission said in a statement.

The world has been witnessing the horrors done in Bucha, Kramatorsk, and other Ukrainian cities since the beginning of the Russian invasion, according to European Commissioner for Justice, Didier Reynders.

“Those responsible for the war crimes in Ukraine must be held accountable,” he said.

The Commission also stated that it will financially help the investigation, whether through money for equipment, specialists, or the work of the Genocide Network, which has begun training judicial authorities on how to develop war crimes cases.

“The EU is also launching a dedicated 7.5 million euro (US$7.92 million) project to support the investigations with ensuring large data collection on missing and disappeared persons,” read the statement.

The EU High Representative for Foreign Affairs and Security Policy, Josep Borrell, also announced that the EU Advisory Mission (EUAM), which was already in Ukraine prior to Russia’s invasion, will now be tasked with assisting the Ukrainian General Prosecutor with investigation and evidence collection on the ground.

The Ukrainian General Prosecution Office, 11 EU member states, and the ICC Office of the Prosecutor have all launched probes into war crimes and crimes against humanity perpetrated in Ukraine since the Russian invasion on February 24.

The Ukrainian Prosecutor’s Office has set up a special website, encouraging citizens to report and document such crimes.