In the fight against the illegal logging industry, Interpol reported Thursday the arrest of 69 suspects and the recovery of more than 80 truckloads of timber unlawfully forested from Latin America and the Caribbean. 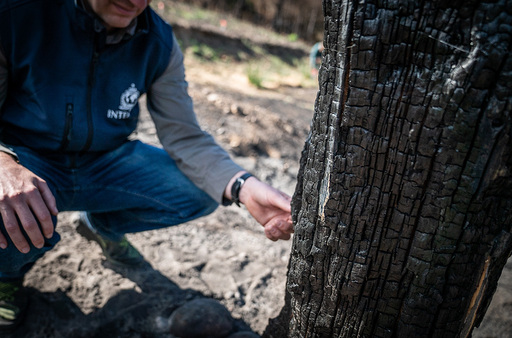 INTERPOL carries out training course on criminal investigation of forest fires. (INTERPOL, License)During a month-long investigation, police, customs and forest agencies from 12 countries documented just under 300 incidents in which organized crime activity has taken a significant interest in timber trafficking.

Springing into action last week, authorities managed to arrest the individuals implicated in the illicit transportation of timber. The 80 truckloads seized held an estimated value of over US$700,000.

Illegal forestation as a whole reportedly generates $152 billion annually, according to the Lyon-based crime agency. Proceeds which are stolen from government tax revenue represent nearly half of all money made from environmental crime.

What makes this form of crime particularly egregious is that Latin America and the Caribbean are where 50% of the planet’s biodiversity and a quarter of the world’s tropical forests call home, according to the United Nations (UN) Environment Programme.

“This harm to the environment means that, wherever forestry crime takes place, its devastating impact is felt globally. These crimes are inflicting damage on ecosystems that may prove impossible to restore,” said Ilana de Wild, Interpol’s Director of Organized and Emerging Crime.

Given the near-unfathomable dollar figures generated by illegal forestation, the problem permeates well beyond the loggers and traffickers on the ground.

The high demand for timber around the world has allowed organized crime groups to finance illicit operations in other industries where they have a vested interest, and has even correlated in a rise in associated crimes such as fraud, money laundering, and corruption.

For instance, false declarations on the quantity and value of existing timber stockpiles allows them to cut more and stretch their profit margins to the limits, thereby destroying natural habitats and contributing to the extinction of several species.

The nature of transnational organized crime also makes the perpetrators unsympathetic to the resulting human cost. For example, excessive foresting can cause floods and landslides, both irreparably harming the natural environment as well as cutting off forest-based communities from access routes to humanitarian aid, according to Interpol.

Regardless, the multi-faceted problem continues to not only persist but thrive; Amazon deforestation rates documented in 2020-2021 were the highest they’ve been in 15 years.

In Brazil, for instance, the Yellow Ipê wood, prized for its strength and durability, commands a commercial value of $6,400 per cubic meter in the U.S., thereby making it an attractive commodity for organized crime groups, according to an OCCRP report from February earlier this year.

Crime and money rarely go hand-in-hand on such a scale, however, when corruption is not in the mix as well.

In this case, Brazil’s forestry credits system was used to disguise the origin of the Yellow Ipê before the timber was sold to the United States, according to leaked documents obtained by OCCRP.

“All [the] transactions … are contaminated by fraud, given that the input of all these credits is fraudulent and has the objective of backing wood without legal origin,” according to a report by the Brazilian Institute of the Environment and Renewable Natural Resources.

A resulting internal investigation, however, deflected the blame on “the presentation of false documents.”

When one considers the illicit transports recovered last week, the fraud involved in obtaining fake logging permits, and the corruption involved in the timber’s processing and exportation, one begins to gain an understanding into the true scope of the problem that authorities must contend with.

All together, Interpol reports that the illegal logging industry controls roughly 30% of all timber traded globally.