The United Kingdom acted together with the United States, European Union, Japan and Canada to cut Russia’s Central Bank off from the international market in response to the Kremlin-led aggressive invasion against Ukraine. 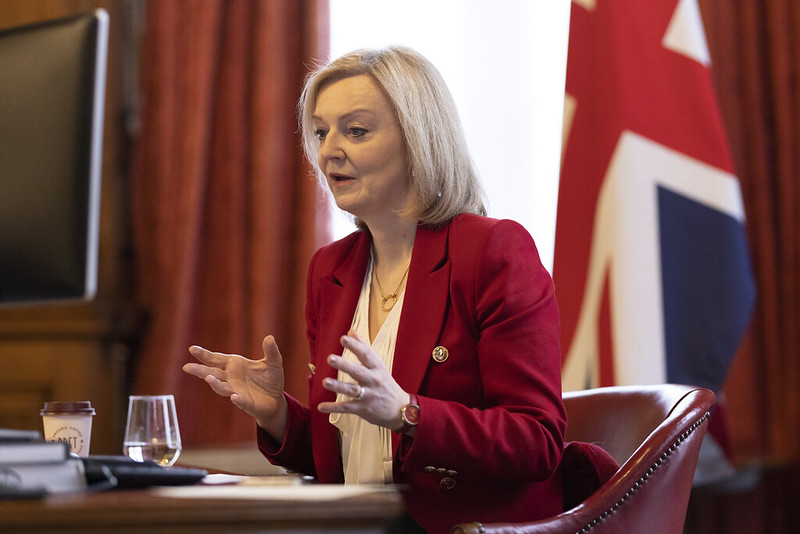 U.K. Foreign Secretary, Elizabeth Truss, MP: “Putin must lose!” (Photo: Simon Dawson/UK Government, Flickr, License)“Our collective action against Russia’s Central Bank will prevent them from deploying their international reserves to mitigate the impact of our sanctions. We are also launching a joint task force to hunt down the assets of oligarchs hit by our sanctions,” the U.K. Foreign Secretary, Elizabeth Truss, MP, said Monday in her statement to the House of Commons.

The initiative has already shown effects, with the ruble falling by more than 40%. According to Truss, the Russian stock market has lost up to US$250 billion in value.

The U.K. is supporting Ukraine in many ways, including by undermining Russia's economy and preventing it from funding Putin's war machine, Truss said. London is also isolating Putin globally, while supplying Ukraine with defensive weapons, humanitarian relief, and economic assistance.

Truss reminded that the U.K. has directly sanctioned Russian president Vladimir Putin and the Russian Foreign Minister Sergey Lavrov, as well as Russia’s defense industry, and a “growing list of oligarchs.” Within the growing sanctions, the U.K. followed its allies — froze assets of several Russian banks and banned Russian airlines and private jets from its airspace.

The U.K. also supported the notion to remove Russia's key banks from the SWIFT system, as a first step towards a total SWIFT ban, blocking the country from international financial flows.

“Putin must lose,” Truss said and stressed that sanctions against the regime in Moscow will continue.

“We want a situation where they can’t access their funds, their trade can’t flow, their ships can’t dock and their planes can’t land,” Truss said.

According to Truss, the first imposes a slew of additional sanctions against Russia’s financial industry, including the ability to bar Russian institutions from processing payments in sterling, similar to recent U.S. sanctions restricting Russian banks’ operations in U.S. dollars.

“With over 50% of Russian trade denominated in dollars or sterling, our coordinated action with the United States will damage Russia’s ability to trade with the world,” said Truss. She added that the measure, as soon as it gets approved, will be applied to Russia’s largest state owned bank — Sberbank.

The bank will not be the only target, as Truss announced she will be imposing “a full asset freeze on three further banks, VEB — Russia’s national development bank, SovComBank the third largest privately-owned financial institution in Russia, and Otkritie, one of Russia’s largest commercial banks.”

“This same legislation will prevent the Russian state from raising debt here and it will isolate all Russian companies — that’s over three million businesses — from accessing U.K. capital markets,” she emphasized and added that global giants like Gazprom “will no longer be able to issue debt or equity in London.”

The other legislation that Truss proposed, is aimed at banning exports to Russia across a range of critical sectors, including “high-end technological equipment such as microelectronics, marine and navigation equipment.”

“It will blunt Russia’s military-industrial capabilities and act as a drag on Russia’s economy for years to come,” she said.

Sanctions are already having an impact on the Russian economy, and an increasing number of nations and companies are ceasing business with the Russian Federation.

Some of the largest global shipping companies, including Maersk, UPS and FedEx are suspending their services with Russia and Ukraine. UPS has suspended its services with Belarus too.

“We are closely following the ever-evolving situation with governments posing new sanctions against Russia and the regular adjustments that are being made to the list of restrictions,” Maersk said in a statement on Tuesday.