The Social Democratic Party of Switzerland called on Sunday evening for the abolition of a law that prevents journalists from reporting on Swiss bank clients. The appeal came after a group of international reporters published an investigation that showed Credit Suisse had some very dubious customers. 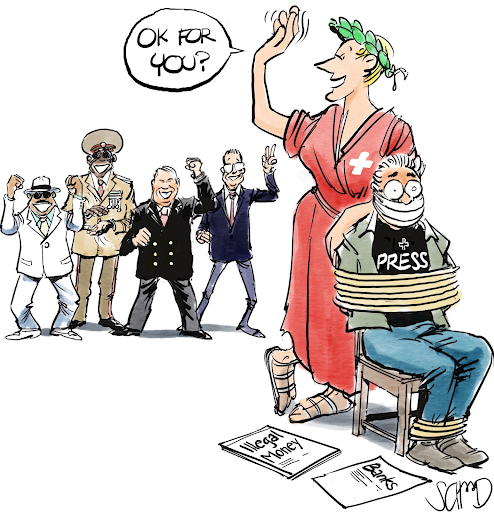 Illustration: Felix Schaad; TamediaMany television news stations across Switzerland on Sunday night led with Suisse Secrets, an international investigation that came as the result of the largest leak ever from a major Swiss bank. But no Swiss journalists were part of the project.

Article 47 of the country’s 1934 Banking Act says that anyone who “discloses information about bank customers to other people” can be punished with up to three years in prison, even if they are exposing criminal behaviour or other wrongdoing of urgent public interest.

This did not scare the 164 foreign reporters from five continents who combed through account data leaked from Credit Suisse — Switzerland’s second-largest bank — to the German newspaper Süddeutsche Zeitung and found clients including an Algerian general accused of torture, a Serbian drug lord, and the children of a brutal Azerbaijani strongman.

Her party will “submit a proposal for this in the spring session,” she said, asking two other parties, Die Mitte and the Green Liberals: “Will you join us?”

Swiss banks are famous for their secrecy. For decades this has drawn rich people from across the world to banks like Credit Suisse, knowing their identities would be closely guarded.

In February 2015, reporters revealed the dubious clients of the Geneva branch of HSBC, including arms traffickers and blood diamond dealers in an investigation known as Swiss Leaks. The infamous addition to Article 47 of the Banking Act came into effect in July the same year.

Now, journalists are asking for its abolishment, reminding that no other liberal democracy is treating reports about such bank accounts as a crime as long as the information is in the public interest.

“The fact that bank data is being leaked in foreign media today, while there is a ban on research in Switzerland, is an absurdity that must be abolished,” said Arthur Rutishauser, the Editor-in-Chief of Tamedia, in an op-ed in the Zuerich-based daily newspaper, the Tages-Anzeiger.

“It's a shame that only foreign colleagues have to do this for us. That is why the gag article in the Bank Data Act should be abolished as a matter of urgency,” Rutishauser said, calling the law “ein Zensurgesetz” or a censorship law that must be urgently abolished.