UK Seizes Millions from Lawmaker Linked to the Azerbaijani Laundromat

The U.K. authorities have seized from an Azerbaijani lawmaker 5.6 million pounds (US$7.56 million) derived from a sophisticated international money laundering scheme that was revealed by the OCCRP and its partners in 2017, the National Crime Agency (NCA) said in a statement on Monday. 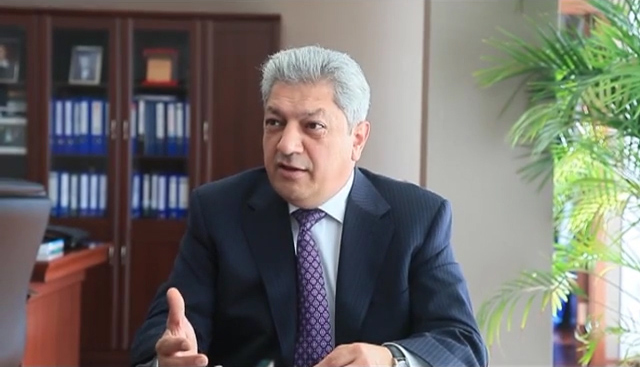 The U.K. authorities have seized from an Azerbaijani politician, Javanshir Feyziyev, 5.6 million pounds (US$7.56 million), derived from a sophisticated international money laundering scheme that was revealed by the OCCRP and its partners in 2017. (Photo: Youtube, License)Based on the results of an investigation conducted by the agency, a court ruled that the money can be seized from six bank accounts belonging to Javanshir Feyziyev, his wife, one of his children and a nephew.

The money came from the so-called Azerbaijan Laundromat, a complex money-laundering operation and slush fund that handled $2.9 billion over a two-year period through four shell companies registered in the U.K.

Some of it simply enriched the Azeri elite and some was, among other, used to pay several European politicians who lobbied on behalf of Baku at a time when the regime threw more than 90 human rights activists, opposition politicians, and journalists (such as OCCRP journalist Khadija Ismayilova) into prison on politically motivated charges.

In November, the NCA requested to seize 15 million pounds ($20.25 million) from Feyziyev and his relatives but the court approved 5.6 million.

Investigators found that some of the transfers to Feyziyev’s accounts were backed by documentation, such as invoices and contracts, pretending to support genuine and large-scale corporate operations but that the documents “were entirely fictitious and were produced in order to mask the underlying money laundering activities of those orchestrating the accounts,” according to District Judge, John Zani.

Both sides appeared happy with the verdict.

“This is a substantial forfeiture of money laundered through the Azerbaijan Laundromat, and our success highlights the risk to anyone who uses these schemes,” the Head of Civil Recovery at the NCA, Andy Lewis, said.

A spokesperson for the Feyziyev family stated that although they are “disappointed that any of the frozen funds have been forfeited, they are pleased to have succeeded in the majority of the claim and to have had the Court confirm that neither ‘Javanshir Feyziyev or any of the Respondents have been engaged in corruption’.”

The Feyziyevs were “relieved” that the Judge has allowed them to keep some 10 million pounds ($13.5 million) of the sum the NCA tried to take from them, “and that this long running matter has at last been resolved, for the most part, in the family’s favour.”

According to Ben Russell, Deputy Director of the National Economic Crime Centre, “this case demonstrates the NCA’s commitment to investigating and seizing the proceeds of international corruption and associated money laundering.”