A baby, a teenager and two adults were discovered frozen to death last week in Canada just meters from the U.S. border, apparent victims of human smuggling. 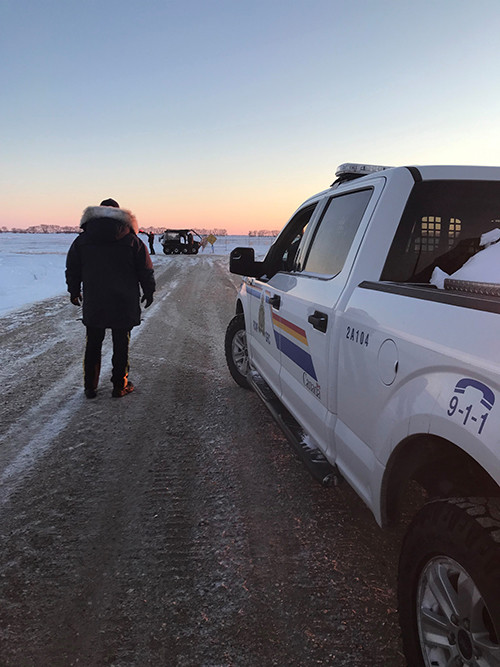 “It is, without a doubt, an absolute and heartbreaking tragedy,” said RCMP Assistant Commissioner Jane MacLatchy, Commanding Officer of Manitoba operations.

The RCMP statement says that, on Jan. 19, U.S. border officials discovered illegal migrants south of Emerson, Manitoba, a community that runs just north of the international border at the point where the U.S. states of Minnesota and North Dakota meet.

Hours after police started to search, the bodies of the four victims were discovered. The cause of death is believed to be exposure to extreme cold temperatures, which reportedly were as low as -35°C (-11°F) factoring in windchill.

“These victims faced not only the cold weather but also endless fields, large snowdrifts, and complete darkness,” said MacLatchy of the victims’ final hours.

The U.S. Department of Justice says that Steve Shand, 47, of Florida has been arrested on suspicion of transporting the victims, as well as other foreign nationals.

An affidavit filed by Special Agent John Stanley of the U.S. Department of Homeland Security says that earlier on Jan. 19, American authorities pulled over a fifteen-passenger van less than one mile south of the border. In the van were Shand and two undocumented Indian nationals.

Shortly after the three were detained, police came across five more Indian nationals on foot approximately a quarter mile south of the Canadian border. They told police they had been walking for more than 11 hours overnight and were expecting to be picked up by someone when police found them.

One of the five had a backpack that belonged to a family that had become separated from them during the night. Inside were children’s clothes, a diaper, toys, and children’s medication; police said later it belonged to the four who had died.

They all spoke Gujarati, a language spoken in western India, but few had any proficiency in English.

One of the Indian nationals who spoke some English told Stanley he had paid a significant amount of money to enter Canada from India under a fraudulently obtained student visa.

The U.S. Border Control classifies the territory just south of Emerson as popular with human smugglers. Since December of last year, three separate incidents have been documented in the same area where Shand was arrested.

On Dec. 12, RCMP officers discovered a backpack with a price tag in rupees, India's official currency. And on Jan. 12, police found boot prints that matched the same brand of boots worn by five of the foreign nationals arrested with Shand on Jan. 19.

Statistics released by the Immigration and Refugee Board of Canada show that 59,776 documented irregular border crossings were made between March 2017 and September 2021.

Winter conditions in the Canadian Prairies can be extremely dangerous for the unprepared, especially migrants caught outside for extended periods. The region is amongst the coldest in Canada due to Arctic winds blowing from the north; temperatures frequently drop as low as -40°C (-40°F).

Assistant Commissioner MacLatchy ended her statement with a plea to all other migrants who plan on crossing the border illegally.

“Don’t do it,” she said. “Do not listen to anyone who tells you they can get you to your destination safely...You will be risking your life and the lives of the people you care about.”