The U.S. Department of Justice filed for the civil forfeiture of a massive trove of Khmer artifacts looted from Cambodia and trafficked by late antiquities dealer Douglas Latchford who allegedly forged provenance documents and used offshore trusts to sell looted art. 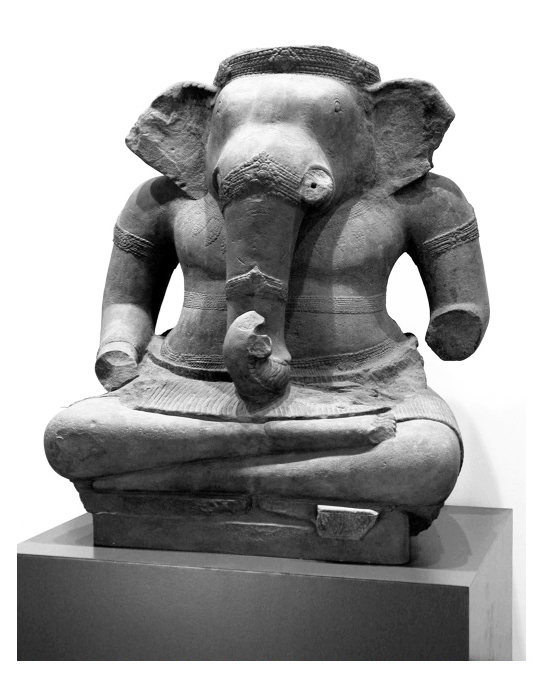 Whereabouts of Ganesha Statue from Cambodia is allegedly unknown. (Photo: Andy Brower, Twitter, License)Latchford sold the collection to its present owner with “false statements and fake provenance documents intended to hide the fact that the antiquities were the products of looting, and then imported the antiquities through lies on customs paperwork,” said the DOJ in a statement.

Latchford, who died in 2020, was a well known antiquities dealer specializing in South and East Asian artifacts. For decades he was a choice supplier for wealthy socialites looking to add a piece of history to their decor.

The illegal antiquities trade is a multi-billion dollar global industry according to a 2018 report by Standard Charter Bank. Its beneficiaries are not just high society art aficionados, but often the trade is a major funding source for criminal and militant groups on the supply side.

In 1970s Cambodia, where Latchford specialized, his work gave a much needed funding source to an increasingly isolated Khmer Rouge government.

“For a half century, Latchford plundered the rich heritage of the Cambodian people, crimes that we now know helped to fund the Civil War and Killing Fields.” said the Antiquities Coalition, an NGO which combats the illegal antiquities trade, in a statement.

In 2019 Latchford was charged with wire fraud conspiracy and other crimes related to his trafficking in looted Cambodian antiquities.

His death a year later seemed like a major roadblock to the case until his name appeared in the Pandora Papers, a major leak of documents that exposed many of those who used offshore companies to hide their wealth.

In them, reporters found details of how Latchford managed to move his money and even some of the looted goods abroad after he got wind that U.S. authorities had taken an interest in his case.

Among the 35 artifacts in the current trove is a monumental sandstone sculpture of the hindu god Ganesha from the ancient capital of the Khmer empire, Koh Ker, and bronze sculptures from near Angkor Wat, the world’s largest temple complex.

Over the years, Latchford “lied to and withheld information” from the current owner in order to conceal that the artifacts were stolen, the statement said.

For years, the Antiquities Coalition had the more than 1,000-year-old Ganesha statue on its top ten most wanted list of looted artifacts.

“Standing five feet tall, it was photographed at the site in the 1930s, but then vanished during the country’s many years of civil war and genocide,” the Antiquities Coalition explained in a statement. “A near identical twin emerged in a temporary exhibition at Berlin’s Asian Art Museum in 2004, prompting leading art historians and archeologists to sound alarms that the pieces were one and the same, only slightly modified to describe its illegal origins. Following the controversy, the “Berlin” Ganesha then disappeared itself, only resurfacing this week as one of the 35 objects targeted by U.S. authorities.”

Though the find has yet to be verified, if authentic, the statue will be the first of any of the ten artifacts on the coalition’s list.

While the Justice Department does not name the new owner, it’s since been revealed that it was tech billionaire James H. Clarke, who founded Netscape and WebMD.

“As a naïve person,” he told the New York Times, “I had apparently somewhat ignorantly acquired one of the nicest private collections of Cambodian antiquities.”

Clark said he hopes that his decision to forfeit the artifacts, – which he paid over 35 million for — without a fight, will serve as an example to others who have come into possession of ill gotten cultural heritage.

“My doing this might inspire other people to do the same,” he said, “but I’m not sure — it’s hard for people to give up something they paid for, but for me, why would you want to own something that was stolen?”

The Antiquities Coalition praised his decision.

“We are grateful for his cooperation and hope that this example inspires others to do the right thing, so more of the world’s top ten missing antiquities can return home,” they said.

Not everyone has such a positive view however.

“Let’s be clear, he [shouldn’t] be “praised” for the return, he should be criticized for the no-questions-asked purchase of a stolen piece,” tweeted the Athar Project, an NGO which tracks the illegal antiquities trade online.