Despite US Sanctions, Lithuania’s Railways Keep their Deal with Belarus

The CEO of Lithuania’s railway company (LTG) announced his resignation on Tuesday after a scandal over the transit of fertilizers produced by a U.S.-sanctioned Belarus company. 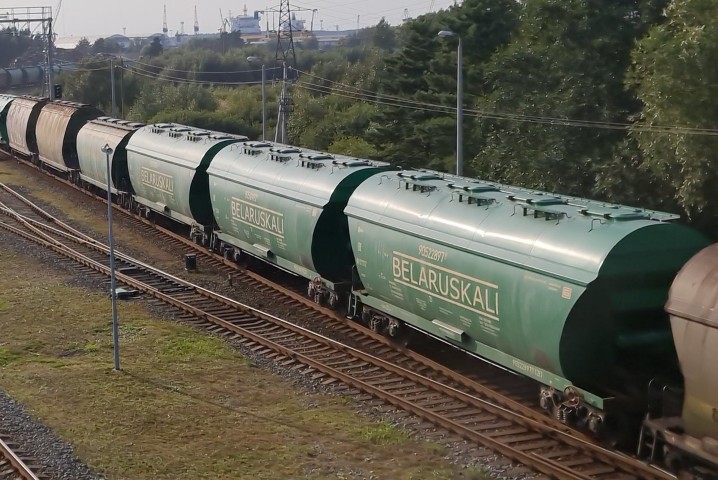 Every year, the Belarus state-owned producer Belaruskali uses Lithuanian railways to ship some 11 million tons of its potash fertilizers across the country toward the port of Klaipėda on the Baltic Sea for further transport to buyers. (Photo: Siena.lt)Two ministers also handed in their resignations, but the prime minister decided to keep the cabinet intact.

Every year, the Belarus state-owned producer Belaruskali uses Lithuanian railways to ship some 11 million tons of its potash fertilizers across the country toward the port of Klaipėda on the Baltic Sea for further transport to buyers.

Although these shipments are a major source of income for both Belaruskali and the Lithuanian railways, the country’s transportation minister Marius Skuodis announced an end to the transits as soon as the U.S. announced in August sanctions against Belaruskali, effective December 8.

Lithuania is known as a fierce supporter of international sanctions against the regime of Alexander Lukashenko. The Baltic country’s tough stance against the rigged election of 2020 and violations of human rights in Belarus is a major part of Lithuania’s foreign agenda. The failure to stop the potash shipments therefore turned into a nation-wide scandal.

Skuodis and the Minister of Foreign Affairs Gabrielius Landsbergis both claimed to be surprised by the shipments and both offered their resignations to Prime Minister Ingrida Šimonytė.

Lithuanian railways explained that Belaruskali paid the fertilizer shipments months ahead and that LTG tried to return some of that money but that the transaction was rejected by the bank.

But OCCRP’s Lithuanian member center Siena obtained evidence that shows the Lithuanian railways were actually actively looking for ways to secure Belaruskali’s payments even after December 8.

Leaked emails show that it was made clear to the railway company that the banking system is not willing to process the payments after the sanctions, so the management turned to FinTech companies, looking for one willing to handle Belaruskali’s payments. At least one came back with a particular solution that was forwarded to the minister of transportation.

After this became public, Skuodis said he did not consider it to be an effort to secure payments after the U.S. sanctions kick in and the chairman of the railway company’s board Kęstutis Šliužas said it was a part of an effort to “mitigate risks.”

Šliužas also announced that LTG’s CEO Mantas Bartuška decided to resign after a yet-to-be-defined ‘transition period’ - a move that appears to have been meant to solve the problem. The two ministers that handed in their resignations could keep their jobs.

“Two cabinet members handed me their letters of resignation after deciding to personally claim the damage to the [country’s] reputation. I appreciate the ministers’ readiness to take responsibility, but I cannot agree with that”, Šimonytė said in a written statement, published late Tuesday night.

It came shortly after the local news portal Delfi published leaked emails from the presidential administration that seem to indicate that President Gitanas Nausėda’s subordinates were in June lobbying for Belaruskali not to be put on the EU’s sanction list.

Instead, the President’s people were trying to push for sanctions against the Astravets nuclear power plant (ANPP), widely considered to be a political and physical risk to Lithuania’s national security.

“We want fertilizers out, ANPP in,” one of the employees of Presidential administration wrote. President’s chief advisor on foreign affairs Asta Skaisgirytė seconded that, saying that sanctions on fertilizers would primarily cause “losses to our business.”

In a written comment, the Presidential administration said the leaked emails “do not reflect the final position” that was agreed upon with the Lithuanian government. President Nausėda reacted by saying these were just ‘fragments’ of correspondence, deliberately leaked to turn the scandal spotlight away from government.

“It is a rather disgraceful thing [aimed to] drive the attention away from one’s own problems,” Nausėda said without directly accusing anyone for the leak.

Be it for Lithuania’s lobbying or not, Belaruskali was in the end not put on the EU’s sanction list, which made the potash shipments through Lithuania easier even after the U.S. imposed sanctions.