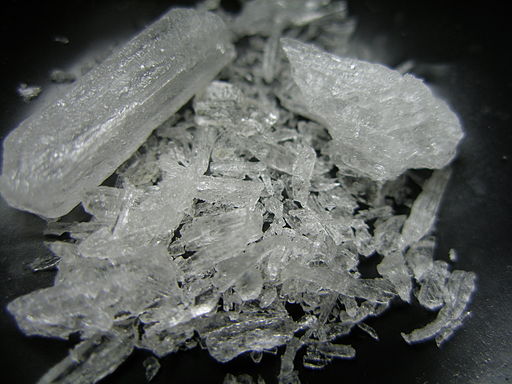 Crystal Meth (Radspunk, CC BY-SA 4.0 via Wikimedia Commons)Officers searched last week a building in East Brisbane as a part of an investigation into the production and trafficking of methamphetamine and allegedly found a laboratory for the production of the drug as well as several firearms, over six kilograms of heroin, two kilograms of methamphetamine and cash worth about US$111.885.

The total value of the drugs found on the address is estimated to be over $2.19 million.

Two suspects from Gold Coast and East Toowoomba were arrested near the East Brisbane address, and charged for drug production, illegal possession of weapons, possession of drug and possession of property suspected of being proceeds of crime.

They are to appear in Brisbane Magistrates Court on November 16 and December 6 and face up to 25 years in jail.

The third suspect from Rockhampton was arrested after the police searched his vehicle and found around $110.423. He has been charged with possession of tainted property and is to appear in Gladstone Magistrates Court on November 22, 2021.

"There's nowhere to hide for groups who seek to produce or peddle drugs like meth, the full force of the Australian Federal Police and our partners is coming for you," said National Anti-Gangs Squad Commander, Andrew Donoghoe.

"The seizure of the firearms, also greatly reduces the risk of harm to the community, by removing them from the hands of gang members, who continue to threaten and use violence as part of their illegal operations," Queensland Police Service Detective Acting Superintendent, Craig McGrath, of the Organised Crime Gangs Group said.