The U.S. Office of Foreign Assets Control (OFAC) sanctioned four Mexican nationals last week, accusing them of trafficking large quantities of fentanyl and other dangerous substances into the United States on behalf of the Cártel de Jalisco Nueva Generación (CJNG), one of Mexico’s most dangerous criminal organizations. 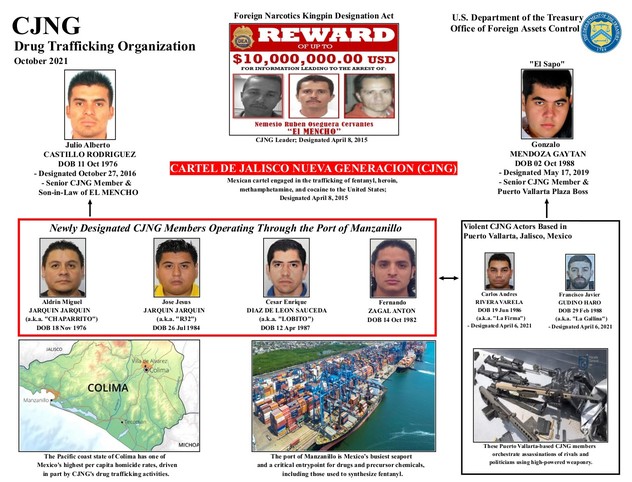 The Kingpin Act’s purpose is “to deny significant foreign narcotics traffickers, their related businesses, and their operatives access to the U.S. financial system and to prohibit all trade and transactions between the traffickers and U.S. companies and individuals.”

According to the U.S. Treasury, the four individuals are considered amongst the most senior members of CJNG, which primarily operates out of the port of Manzanillo in Colima.

The group is designated as a violent Mexican-based criminal organization that engages in various criminal enterprises such as drug trafficking and racketeering.

Their economic success is said to stem from their strategic placement along highly valued trafficking routes, such as the port of Manzanillo.

“This Pacific coast port serves as a significant gateway for Colombian cocaine and precursor chemicals imported from Asia, including those used to synthesize fentanyl for ultimate distribution in the United States," said OFAC Director Andrea M. Gacki.

In several past instances, the cartel has demonstrated numerous violent and extreme measures they are willing to employ in order to seize power and eliminate all who oppose them.

Reportedly, U.S. prosecutors have linked them to an incident involving the destruction of a Mexican military helicopter by a rocket-propelled grenade, according to ABC News.

In June of last year, they are said to have ambushed Omar García Harfuch, Mexico City’s police chief, with two dozen gunmen, firing over 400 rounds into his armoured car. Harfuch was wounded but survived.

Journalists have faced death threats from CJNG as well. Reporters from Vice encountered cartel members at one of their militarized checkpoints in Aguililla. They were forcibly turned away at gunpoint with only a single-worded command: “Regresa” or ‘go back.’

The cartel has even reportedly made the cannibalization of its victims part of the training and initiation of its new sicarios, or hitmen. Mexican authorities say that such measures desensitize the teenaged initiates, turning them into extremely dangerous criminals, according to Mexico News Daily.

Sauceda, as well as the Jarquin brothers, have been singled out by OFAC based on the suspicion that they are the ones who coordinate CJNG’s Manzanillo drug trafficking operations and for being the cartel's liaisons with their cocaine suppliers in Colombia.

Anton is designated as a subordinate to the other three.

As a result of these sanctions, if the four have any properties or other interests in the United States, they now no longer have access to them.

This marks the fifteenth action OFAC has taken against CJNG since 2015.

Ruben Oseguera Cervantes - “El Mencho” - is believed to be the cartel’s leader. American authorities have issued a reward of up to US$10 million for information leading to his arrest.