Italian financial police have seized more than 11 million euro (US$12.89 million) and more than 3.5 million protective face masks in an operation in the Emilia-Romagna region, the European Public Prosecutor’s Office (EPPO) said Friday. 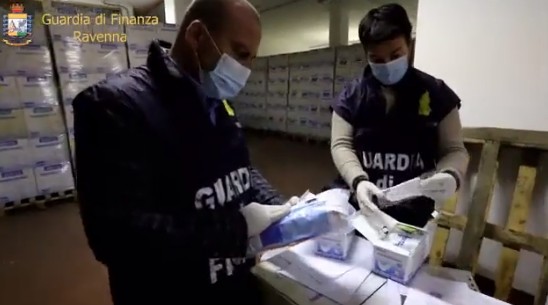 Italian financial police have seized more than 11 million euro (US$12.89 million) and more than 3.5 million protective face masks in an operation in the Emilia-Romagna region. (Photo: Guardia di Finanza, Screenshot, Twitter)Authorities did not identify individuals but said the money was seized from the director of two Italian companies and that person’s accomplice. They were charged with aggravated fraud against healthcare facilities committed in the early stages of the COVID-19 pandemic.

The cash — including millions of dollars in profits from the evasion of customs duties and VAT, as well as proceeds from fraud — was recovered from “the current accounts of the two suspects and the beneficiary companies.”

Italian finance police also seized more than 3.5 million masks including more than 2.5 million that had been smuggled and others that were fake. The masks sold to the hospital in Emilia-Romagna were not approved and did not meet the filtering material's penetration limits, putting hospital workers in danger.

The EPPO and the Italian authorities found that a medical products trading company, based in Faenza 30 miles southeast of Bologna, imported personal protective equipment from China between April and August 2020.

The equipment included masks, protective suits, goggles, face shields and footwear. It was imported under rules allowing “the exemption of import duties and VAT on personal protective equipment if they are delivered directly, and without any commercial mark-up, to public health facilities engaged in the fight against the pandemic.”

Once the products arrived in Italy, the importer sold them at higher rates to another private business, which turned out to be the importer’s parent company connected to the same directors, according to EPPO.

The prosecutors  also said that the company filed fraudulent customs declarations to qualify for  tax exemptions.