Hong Kong will include illegal wildlife trafficking in its Organized and Serious Crime Ordinance, following a Legislative Council vote on Wednesday. 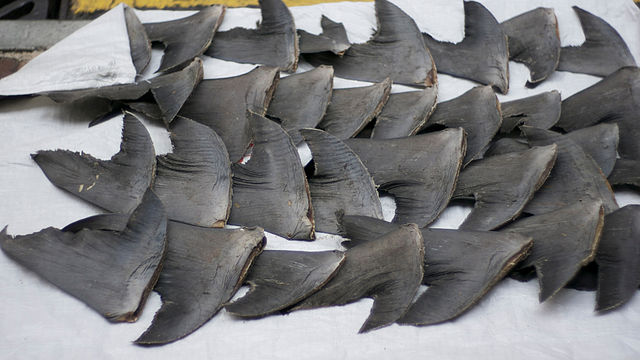 Shark fins, as well as ivory and pangolin scales, sea turtles, rhino horns, endangered fish, shark fins, seahorses, eels, and various kinds of wood, have often been intercepted in the ports of Hong Kong. (Photo: Nicholas Wang, Flickr)Classifying illegal wildlife trade as an organized crime — on par with drug and human trafficking — means that the government will have more authority to investigate and fight it. The Organized and Serious Crime Ordinance was first introduced in 1992 to tackle the growth of organized crime, particularly within Hong Kong triads.

The World Wildlife Fund and other conservation organizations, who have been pushing for increased regulation against wildlife trafficking, applauded the new legislation.

While the volume of illegal wildlife trade in Hong Kong remains high, prosecutors have not been able to pursue some high-profile cases of the past several years when evidence falls short. The new amendment gives local police enforcement more authority to follow the financial trail of illegal wildlife trafficking and confiscate criminal proceeds, according to Jovy Chan, a spokesperson for the Hong Kong branch of the World Wildlife Fund.

Authorities in Hong Kong seized a record-breaking 715 tons of rare and endangered wildlife across 1,404 seizures in 2018 and 2019. Hong Kong has been a hub of wildlife trafficking for years, with pangolins, whose scales are highly prized in Chinese medicine, being one of the most lucrative and commonly smuggled species in the city.

In 2019, 8.3 tons of pangolin scales were seized in Hong Kong along with 2.1 tons of ivory — but the case has remained unprosecuted.

“Hong Kong is a major transit hub for the illegal wildlife trade,” Chan said. “Traffickers exploit the Hong Kong Ports for continuous trade of the world’s most endangered species of wild fauna and flora. The volume of trade is on the rise, contributing to the global extinction crisis.”

Ivory and pangolin scales are far from the only goods passing through Hong Kong ports. Authorities have also confiscated sea turtles, rhino horns, endangered fish, shark fins, seahorses, eels, and various kinds of wood. And numbers have remained high even during the pandemic.

“The illegal wildlife trade is recognized as a key driver of the continued degradation of marine and terrestrial ecosystems and the unsustainable use of precious natural resources,” said Brian Gonzales, who leads the Protection of Endangered Species department of Hong Kong’s World Wildlife Fund.