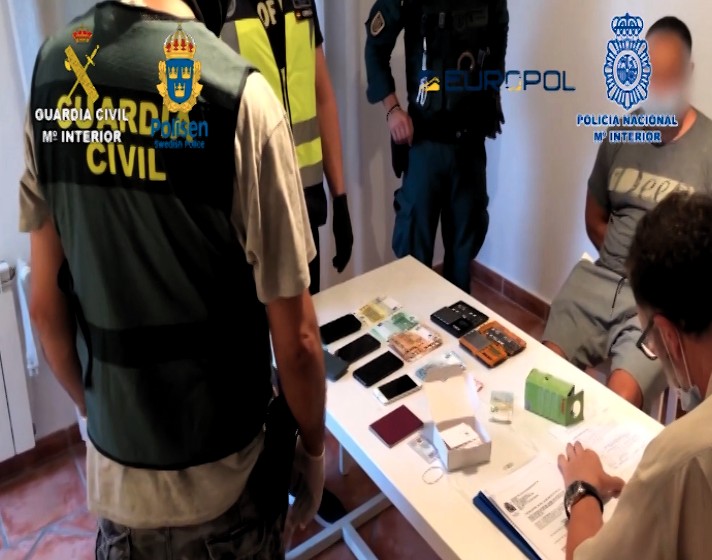 Spanish and Swedish law enforcement arrested 71 people last week during a joint operation against an international drug trafficking group suspected of some 50 debt-related murders. (Photo: Guardia Civil)Made mostly of drug traffickers of Swedish and Polish origin, the group is believed to have used leisure boats and surfboards to smuggle narcotics across the sea between Morocco and Spain.

Once the drugs would reach the Spanish coast, police alleged that the criminals would then employ a Swedish moving business located in Alicante and Malaga to transfer the narcotics from Spain to the Nordic nation, hiding it among the company’s lawful goods.

During the four-phase operation, officers seized “a total of 1,700 kilos of hashish, 500 kilos of marijuana, 55,000 units of an opiate used as a substitute for heroin, five kilos of cocaine, 23 kilos of amphetamine,” and various weaponry.

On request of Swedish authorities, the investigation began in late 2018 and targeted a group of Swedish citizens who were reportedly traveling to Spain on a regular basis to negotiate the acquisition of drugs consignments.

Those individuals were thought to be closely related to the various criminal gangs in Sweden, which were fighting over drug control in Stockholm and Gothenburg.

The investigation, however, revealed that several Swedish criminal organizations converged in Spain around common drug suppliers.

Once the connections between these groups in both countries were established, Europol created an operational research team. According to Spanish police, a legal inquiry was conducted in a similar manner by Spanish and Swedish authorities, with the assistance of Eurojust.