Polish lawmakers voted to pass a contentious bill last week, which has been seen by many to be a step toward suppressing press freedom. Now, it awaits the approval of the Senate and President Andrzej Duda. 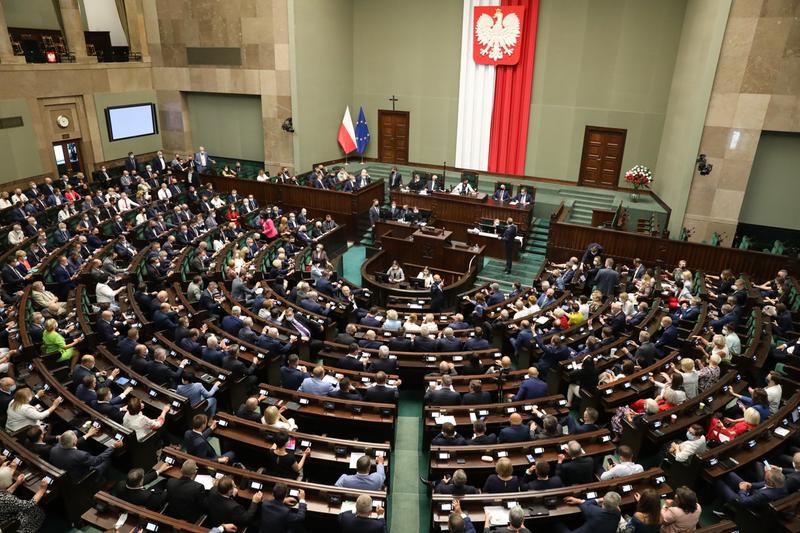 Polish lawmakers voted to pass a contentious bill last week, which has been seen by many to be a step toward suppressing press freedom. (Photo: Poland's Parliament — Sejm)After a heated debate, the bill moved through the Polish parliament’s lower house by a slim margin, with 228 votes in favor and 216 against. Under the law, non-European investors would be prevented from owning half or more of a Polish media outlet. Violators would face losing their broadcasting license.

While the official reason for the amendment is to keep out propaganda from “hostile” foreign states, its controversy — which has in recent days led to the dissolution of the former ruling coalition and nationwide protests — largely has to do with one media network: TVN.

TVN runs the country’s most popular news program and operates Poland’s independent 24 hour news channel, TVN24. It’s also critical of the Polish government and has already been the subject of government harassment and a heavy fine.

TVN is fully owned by a company registered in the Netherlands, but that company is a subsidiary of U.S. group Discovery Network. As such, TVN is one of the US’s largest investments in Poland.

Discovery, Inc. on Thursday formally notified the Polish government that it will take legal action against the bill under a U.S.- Poland investment treaty.

“We are deeply committed to safeguarding our investment in Poland and its people, defending the public’s interest in independent media and the rights of freedom of expression. Discovery, as a protected investor in Poland, is afforded important rights and freedoms under the U.S.-Polish Treaty,” JB Perrette, the media conglomerate’s CEO, said.

Poland, which ranked 15th in the Reporters Without Borders (RSF) World Press Freedom Index in 2015, has been steadily losing ground in the rankings since the ruling right-wing Law and Justice party came into power. It now stands at 64th place worldwide.

“In the current context of media ‘repolonisation,’ this amendment is in reality designed to allow the authorities to buy up media outlets via government-controlled companies,” RSF Pauline Adès-Mével said.

The bill has drawn criticism from the EU and the U.S.

Vice-President for Values and Transparency in the EU Commission Věra Jourová tweeted on Wednesday that the draft law “sends a negative signal” against media freedom and the rule of law.

“Media pluralism and diversity of opinions are what strong democracies welcome, not fight against,” she said.

In a press statement on Tuesday, U.S.Secretary of State Anthony Blinken said that he was “deeply troubled” by the law.

“This draft legislation would significantly weaken the media environment the Polish people have worked so long to build,” Blinken said, adding that it “threatens media freedom and could undermine Poland’s strong investment climate.”