An Interpol operation involving 47 countries worldwide rounded up 286 people suspected of being members of human trafficking and migrant smuggling criminal groups and rescued 430 victims, according to a statement released on Monday. 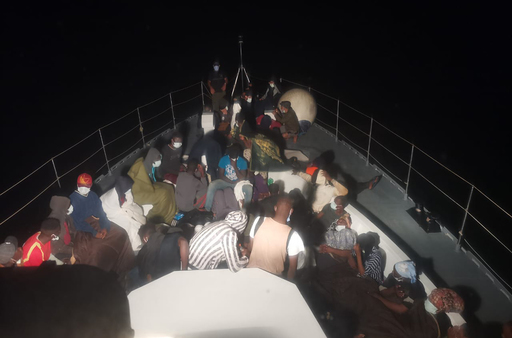 The Tunisian coast guard rescued 69 migrants from 11 different African countries after receiving a distress call from their boat. (Photo: Interpol)Police carried out some 500,000 inspections at checkpoints, airports and other hotspots in Operation Liberterra, which took place across five days, from July 5 to July 9.

The coordinated operation allegedly dismantled 22 criminal organizations. Apart from the 430 rescued human trafficking victims, another 4,000 migrants from 74 countries were identified, many of whom required medical, psychological and housing assistance.

Colombian authorities broke up two different criminal networks, one of which smuggled migrants into the U.S., and the other focused on bringing Cuban and Haitian migrants from Ecuador into Colombia.

In Sudan, police rescued 253 human trafficking victims and made 32 arrests. Members of a smuggling ring in North Macedonia bringing migrants from Afghanistan, Bangladesh, Pakistan and Syria into Greece were also arrested.

Interpol Secretary General Jürgen Stock called the operation a “five-day snapshot of the global trafficking and smuggling situation, and how multinational, highly organized criminal networks only focus on one thing: profit.”

The Interpol statement called fake or stolen identity papers the “golden ticket” of illegal smuggling. During the first day of the operation, authorities in Tanzania arrested a Ugandan bus driver carrying 169 forged passports.

According to a 2018 UN Office on Drugs and Crime report on migrant smuggling, there is evidence that at least 2.5 million migrants were smuggled in 2016 for an economic return of between US$5.5-7 billion.

Smugglers, focused on making a profit, pay little to no heed to the safety and wellbeing of migrants. Thousands die while being smuggled, from accidents, extreme weather conditions, and deliberate killings. They’re also vulnerable to other forms of crime, including trafficking, violence, rape, theft, kidnapping and extortion, and their deaths often go unreported.

During Operation Liberterra, Croatia and Nicaragua reported deadly traffic accidents when smugglers tried to avoid road checks. Migrants in Slovenia were found traveling inside dog houses. In Greece, migrants paid as much as $2,400 for a four-hour car journey. Young girls in Lebanon and Venezuela coerced into sexual exploitation rings were among the underage trafficking victims rescued during the operation.