At the time the United States and European countries had banned or limited export of vaccines against the coronavirus to first deal with the pandemic at home, Russia was willing to share its Sputnik V with countries in need. 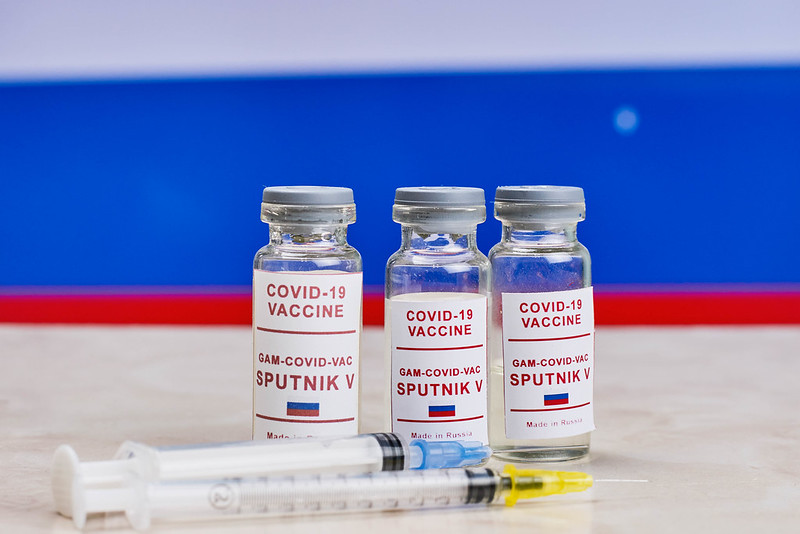 The Russian Direct Investment Fund (RDIF) gave exclusive rights to Aurugulf Health Investments, an Abu Dhabi company with close connections to Emirati royalty, for reselling the Sputnik V vaccine. (Photo: Marco Verch Professional Photographer, Flickr, License)However, the distribution often goes through middlemen who appear to be reselling the vaccine for almost double the price they paid for it.

A Moscow Times investigation revealed last week an opaque deal Russia made with a royal Emirati family to deliver vaccines to the developing world.

Aurugulf was established late last year and has almost no digital presence. The group is run in part by the Royal Group, a company led by Sheikh Tahnoon bin Zayed al-Nahyuan, the national security advisor to the UAE and the brother of Abu Dhabi’s ruler.

Ilya Shumalov, head of Transparency International in Russia, told the OCCRP that the projects may also be military related. As a result, Maktoum and other members of the Emirati royal family have close contacts in Africa and the Middle East. And so, this is where Maktoum is focused on reselling vaccines, Shumalov explained.

Russia had advertised a selling price of $9.95 per dose and European countries Slovakia and Hungary, who struck deals with Russia directly, were able to pay that promoted price. Countries who negotiated through Aurugulf, though, paid more than double.

Yet, these countries didn’t have any other option to secure the Sputnik V vaccine. In the still unfolding list of countries where Russia and Maktoum have made a deal, Aurugulf has exclusive selling rights. This means that the countries must buy Sputnik V through him, and pay his price—despite any efforts to circumvent this.

“The use of the Emirati scheme to sell Sputnik V has been met with uproar in almost every country where a supply deal is known to have taken place,” the paper wrote.

In Pakistan and Lebanon, Maktoum made exclusive deals with the private sector, and potentially prevented the government from being able to distribute Sputnik V.

In Ghana, the government faced fierce backlash for buying 3.4 million doses at the high price of $19; Maktoum made an estimated $30 million in that deal.

The secrecy shrouding the agreement between the UAE and Russia has incited confusion in countries and among politicians unaware of this deal.

Once Guyana discovered their vaccine shipment arrived from Dubai, they delayed distribution in order to investigate. The government didn’t know they were ordering Russian vaccines through the UAE and were confused about the shot’s origin. As a result, the Ministry of Health in Guyana had to issue a public statement apologizing for the delay and causing “irreplaceable harm” in the national vaccination program.

Similarly, when Kenya received their Sputnik V vaccines in a shipment from Dubai, they became suspicious, and the government pulled its authorization. The doses remain unused.

“The Sputnik V story here is sort of murky,” DmitriyCharneskiy, a Russian diplomat in Kenya, told the Moscow Times. “I don’t know who exactly brought in the vaccines, I just know they came from the UAE. We had no involvement in the distribution at all.”

In the messiness of the distribution, though, Russia’s reputation remained unscathed. Shumalov told the Times that this could be part of the reason Russia made the deal with the UAE in the first place: a way for the country to transfer blame in the risky business of global vaccine distribution.

Not many other clear reasons for the deal have emerged but Shumalov told OCCRP that “selling through a third party is a traditional practice for Russia.”