Thousands of Georgians protested on Monday against the government, requesting the resignation of the prime minister over the death of a journalist who was beaten by an anti-LGBTQ mob last week. 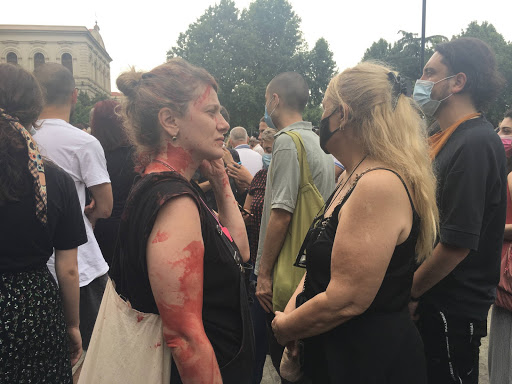 Woman with blood-mimicking fluid on her body protests against the death of a journalist. (Photo obtained by OCCRP)The protests erupted on Sunday after cameraman Alexander Lashkarava was found dead in his home a week after the mob attacked dozens of reporters who were covering a gathering of opponents of an LGBTQ parade that was planned to be held in Tbilisi.

The Tbilisi March for Dignity was scheduled for Monday, July 5, but had to be canceled after government officials and the Church issued statements condemning the event and authorities failed to provide adequate security to the participants.

Instead, the far-right mob organized anti-LGBTQ protests and attacked the media, injuring a total of 53 reporters.

Witnesses said Lashkarava was laying in a pool of blood while about 20 men were beating him for several minutes. He was hospitalized with bad facial injuries and underwent eye surgery, but was soon released from hospital, according to TV Pirveli, an independent channel he worked for.

Many in Georgia believe that Lashkarava died from injuries he sustained during the attack.

NGOs demanded in a statement the immediate resignation of the government and more than 70 media outlets issued a joint statement, asking representatives of the diplomatic corps and international organizations accredited in Georgia to respond to the government’s inaction on July 5.

“Cases of violation of the rights of media representatives in Georgia have reached a critical level. Dozens of cases against the media remain uninvestigated. The authorities fail to ensure the safety of journalists, while the statements by the officials of the ruling party encourage the violence,” the statement said.

However, Gharibashvili said during Monday’s government session that anti-state, anti-church and anti-national messages were heard at the rally organized by media representatives in front of the Georgian Parliament. He accused several media outlets of trying to overthrow the government and pledged not to allow that to happen.

Gharibashvili also said that the majority of the population is against the LGBTQ march and that it should not be held. "When 95% are against holding a march, everyone must obey," the Prime Minister said.

The Committee to Protect Journalists urged authorities to thoroughly investigate whether Lashkarava died as a result of the assault he suffered while covering a demonstration.

“Those who attacked him and some 50 other journalists during a disgraceful display of anti-media violence should be brought to justice,” said Robert Mahoney, CPJ’s Deputy Executive Director.

Police detained two people last week and said on Monday that officers checked 65 video footage from surveillance camera systems in order to establish Lashkarava’s movements on July 5, interviewed 110 individuals in connection with the attack and arrested another person whom they identified only by his initials D.T.

Local media revealed that the arrested man was Davit Kutaladze, who has previously made aggressive and homophobic statements. Upon hearing about the cameraman’s death, Kutaladze posted a video, stating that "they got what they were asking for." If found guilty, he faces up to six years in prison.

Georgian Interior Ministry said on Monday that Lashkarava could have died from overdose because an analysis found morphine, codeine, tetrahydrocannabinol, gabapentin and monoacetylmorphine in his body. He was seen visiting parts of Tbilisi where drug dealers operate, officials said.