In two separate incidents this week, journalists have faced repression in Turkey, according to the Committee to Protect Journalists. 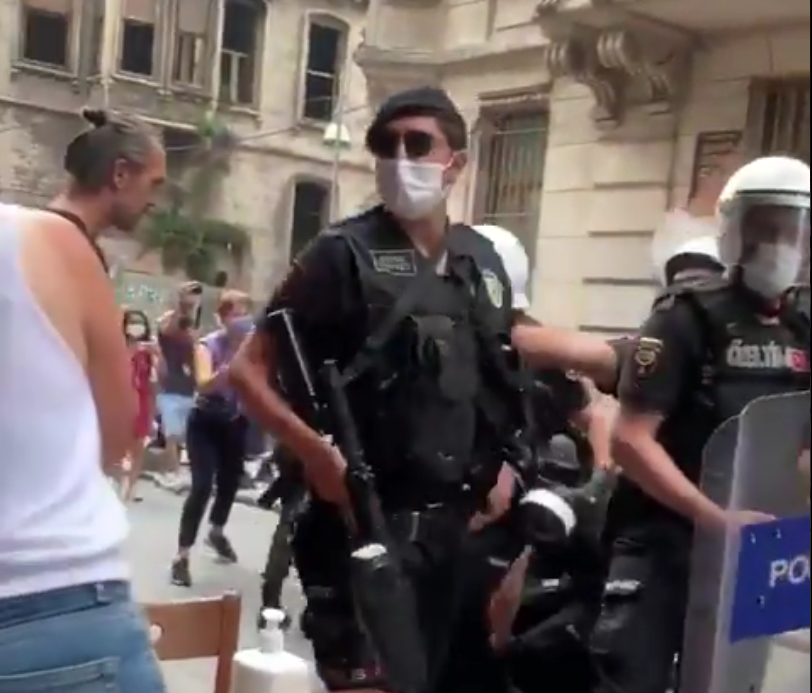 In past years, Istanbul’s pride parade has been one of the largest celebrations of LGBTQ+ identity in the Muslim world. (Source: Screenshot/Twitter)In the southeastern city of Diyarbakir, Turkish authorities sentenced Hakki Bolton, a Turkish journalist and press freedom advocate, to two years in prison for allegedly insulting the president and prime minister, CPJ said in a statement.

The charges stem from a 2016 article he wrote wherein he criticized President Recep Tayyip Erdogan and then-President Ahmet Davutoglu for the death of a Kurdish journalist during the Turkish military's siege of Kurdish militants in the city of Cizre.

Bolton is far from the only Turkish journalist to be imprisoned. Since the 2016 failed coup attempt which rocked the country, some 200 journalists have been arrested, according to a January report on press freedom in the country by Reporters Without Borders (RSF.)

In a second  incident this week, Bülent Kılıç, a photographer working for Agence France Presse, was beaten by police while covering Istanbul’s pride parade Saturday.

“Officers hit Kılıç in the face with his camera and threw the camera to the ground, breaking it, and then pinned him to the ground by kneeling on his neck and back,” CPJ said in a statement.

Kılıç later called the incident an attempt on his life in a tweet. CPJ is calling for a thorough investigation into his attack.

In past years, Istanbul’s pride parade has been one of the largest celebrations of LGBTQ+ identity in the Muslim world. However, holding the festival in an increasingly repressive Turkey has been no small task.

While in 2014, Istanbul pride attracted as many as 100,000 and went off without a hitch, by 2016 the event was banned by Turkish authorities. Since then, although thousands continue to attend the event, they have been met with water cannons, rubber bullets and other forms of suppression.

Istanbul police maintain that Kılıç was erroneously detained among the marchers they were attempting to deter.

“It was determined that Bülent Kılıç, a member of the press, was among those who were caught together with the group that resisted during the prevention of the illegal demonstration,” a police statement said. “He was released after taking his statement after declaring that he was a member of the press and that he had filed a complaint against the relevant personnel during the proceedings at the Beyoğlu District Police Department.”

Press accreditation from the Turkish government provides reporters with a measure of legitimacy and at least some protection when covering protests and demonstrations. Had Kılıç been without a press card, he might not have been released from police custody so quickly.

However, according to Reporters Without Borders, Turkey’s Presidency Communications Directorate (CIB) is in charge of  granting and renewing press cards, and it has been increasingly difficult for critics of the Erdogan government to get such cards.

“Pro-government journalists have no trouble obtaining CIB press cards, even those guilty of hate speech, disinformation or hounding human rights defenders. But in recent years, leading critical journalists have had their CIB press cards withdrawn or their renewal requests have gone unanswered, “ RSF said in a statement on Tuesday.

The media rights group is now calling on the Turkish government to establish an impartial commission to handle press accreditation.

“As it seems too much to expect a presidential office to manage press card allocation impartially, we ask the government to reinstate an autonomous journalistic entity in order to put an end to biased practices that penalize critical journalists,” said Erol Önderoglu, RSF’s representative in Turkey.”