President Volodymyr Zelensky is picking up speed on his mission to dethrone Ukraine’s oligarchs, the small group of very rich and influential people with an outsized influence on the country’s government. 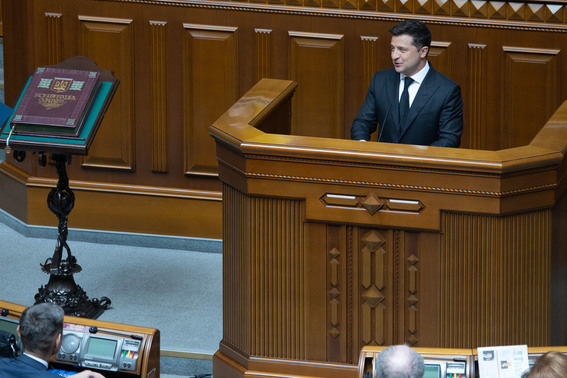 Ukraine's President Volodymyr Zelensky has forwarded to the state's Parliament an anti-oligarch draft law. (Photo: Ukraine President's Office)Dmytro Firtash, sanctioned Thursday, was the second such tycoon to be implicated by the crackdown.

Zelensky introduced legislation to Parliament on June 2 to diminish their influence by banning them from aspects of public life. The bill hasn’t yet passed, but Zelensky has issued anti-oligarch decrees through the Security and Defense Council, which he chairs.

Ukrainian oligarchs rose to power after the fall of the Soviet Union. For decades, some have held high positions in parliament and controlled the media. Prime ministers in the past have attempted, without any success, to end their rule. Zelensky is the latest to try, running on an anti-corruption platform that stressed rooting out oligarchs.

"I do not want us to have oligarchs,” the president said, citing the group’s disproportionate influence. “That's why I know that during my term we will get rid of all the oligarchs. I gave such a word, and I am going to do it.”

According to the June 2 bill, an oligarch is defined by four criteria: one must participate in politics, hold media influence, benefit from monopolies, and have assets worth over 2.2 billion hryvnia (US$81 million).

Anders Åslund, a senior expert on Ukraine for the Atlantic Council think tank, told the OCCRP that he thinks the bill’s definition of an oligarch is too broad.

As written, he explained, anyone who buys media in Ukraine will be deemed an oligarch--which he predicts will keep foreign investors out of the business. And, Åslund said, the wealth requirement is too low. He estimated that, under Zelensky’s criteria, one thousand Ukrainians would qualify as oligarchs on the basis of wealth alone.

Those deemed oligarchs by this bill will have their access to public life limited. They won’t be able to donate to political parties—which is how many wield their influence in the government—and will be prohibited from participating in any form of public procurement.

Åslund agrees that there should be some regulation of oligarchs in Ukraine, but doesn’t think that such an extreme bill is necessary. “The big danger in Ukraine is not oligarchs but the predator state,” he says, referring to the president and his cabinet. Zelensky, with this latest bill, seems to be on his way to consolidating  influence, he said, comparing Zelensky’s current moves to those of Putin in the early 2000s.

Even though the bill was just introduced, Zelensky has been targeting oligarchs for months. In May, Viktor Medvedchuk, an oligarch and a pro-Russian member of Ukrainian parliament, was charged with treason by the state. As punishment, Medvedchuk was sanctioned by the Ukrainian Security and Defense Council. Firtash is the latest addition to this list, but unlikely to be the last.

Åslund doubts the bill will pass Parliament, as so many oligarchs are members of the body. He predicts Zelensky will continue to sanction oligarchs through the council, as he did already with Medvedchuk and Firtash. “This is how you establish authoritarian power,” Åslund warned.