Over 1,200 Tons of Illegal Pesticides Seized in Multinational Operation

Authorities in 35 countries arrested 12 people and seized more than 1,200 tons of counterfeit and illegal pesticides that can be extremely dangerous for the environment and human health, Europol announced on Thursday. 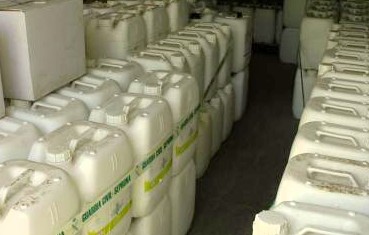 Pesticides worth up to 80 million euros (US$95 million) in criminal profits seized during Operation Silver Axe VI. (Photo: Europol)“The use of cheaper illegal and substandard products has led to the devastation of fields and other ecosystems, which has caused serious harm to the world’s biggest pollinators: bees,” the agency said.

The joint operation was coordinated by Europol and was part of a six-year-old Silver Axe campaign targeting the trade in counterfeit and illegal pesticides. So far over 4,157 tons of illegal pesticides have been seized.

Two years ago, officers conducting searches as part of the multinational operation uncovered that the unregulated use of neonicotinoid, contained in a non-approved product, led to the death of bees raised in the area.

“Although the trees that the product was used on did not have flowers, their leaves extracted sugar, attracting and poisoning the nearby bees,” the statement explained.

This year the operation took place between January 13 and April 25 and was carried out by law enforcement in all 27 EU member countries as well as Australia, Brazil, Colombia, Switzerland, Ukraine, the United Kingdom, Norway and the United States.

Officers carried out inspections on land and sea borders, inland marketplaces, parcel service providers and online marketplaces, which resulted in 268 separate seizures of illegal pesticides worth up to US$95 million and led to seven arrests in Italy and five in Spain, Europol said.

The abuse in the trade of illegal pesticides varies from trafficking counterfeit or mislabelled products to irregular imports of banned substances such as chlorpyrifos.  The insecticide is no longer approved for use in the EU and was specifically targeted during Silver Axe VI.

While Asia and South Asia remain the major source regions for illegal pesticides, Europol has noticed an increase in their online sales.

Government officials might grant parallel trade permits to companies to reproduce pesticide products on the condition that they are identical to the original. But to lower costs, sometimes producers substitute authorized ingredients for illicit ones.

Other times, pesticides made with ingredients banned in the EU may penetrate the market if sellers claim that they are en route to other markets. However, sometimes these products stay in the EU, where they are sold on the black market.

Europol Executive Director, Catherine De Bolle, said that the operation has brought together an “increasing number” of legal authorities over the past six years.

“Cooperation between industry and Europol on illicit pesticides is more vital than ever,” CropLife Europe’s Director-General, Géraldine Kutas, said. “We need to continue raising awareness for both farmers and the legitimate distribution channel to make sure they reject criminal offerings that jeopardise the sustainable production of food.”