Corruption is rising in Croatia, as is the number of people leaving the country and the two trends are connected, says a new report released to the Croatian media this week and shared with OCCRP on Wednesday. 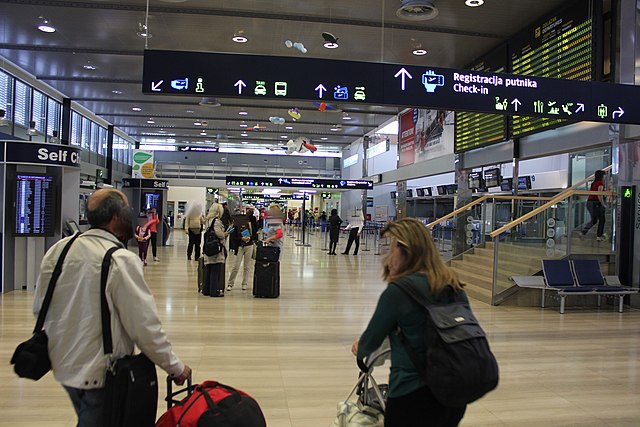 Check-in, Airport in Zagreb, Croatia. (Photo: Vitorabdala, Wikimedia, License)High levels of emigration and corruption don’t just co-exist inside Croatia — they correlate with one another, Tado Jurić, a political scientist and historian at the Croatian Catholic University, revealed in his study “Research on Corruption in Croatia - Measuring Corruption.”

“In other words, the more emigration, the more corruption in Croatia,” Jurić writes.

For this study, Jurić built upon his 2018 research results on migration patterns, which revealed an 8% population decline over the course of seven years. He connected this with his current findings on moral erasure in Croatian society.

In a survey of companies across the country, 65.3% said that they believed corruption increased in Croatia in the past five years. Three quarters of respondents said they knew of businesses which had bribed government officials in order to operate.

Past research and literature corroborate these insights.

Transparency International, an independent think tank, ranked Croatia as the 63rd most corrupt out of 180 countries in its 2020 Corruption Index, and a “bottom scorer” in the European Union. Croatia has hovered around the 60s ranking since 2015.

In the same five years, Croatia’s net migration rate was -0.1 migrants per 1000 people, according to the International Organization for Migration (IOM).

In the recent months — and even days — the media has focused attention on both Croatia’s high emigration and high corruption rates, separately. A headline by Total Croatia News this February designated Croatia’s emigration rate as the second highest in the EU, right after Lithuania.

Just this week, Transparency International’s Global Corruption Barometer deemed Croatians as the most concerned about government corruption out of every country in the EU.

The results of Jurić’s new paper and book, Gastarbeiter Millennials, link these reported increases — and explain how emigration is both the result of past corruption and the fuel for further corruption.

“Namely, if the critics leave, it becomes easier for the criticized,” Jurić writes. “Increased emigration reduces the possibility of pressure from citizens on political elites, because it is those who leave who would be most capable of initiating change and they are the most motivated for change.”

With fewer people to hold power accountable, there’s more corruption. And when graft runs rampant inside a country, those uninvolved want to leave to find honest work. Jurić calls this the “departure of the dissatisfied.”

Predrag Bejaković, a researcher with the Institute of Public Finance, believes that there are many, complex reasons people leave Croatia — such as to search for better economic opportunities--beyond just corruption. “There’s no simple explanation,” he told the OCCRP, but acknowledged that instability is a reality in Croatia, due to an inefficient judiciary system and constantly changing laws.

And if this doesn’t change, Jurić warns, much is at stake — not only for the Croatian economy, but for the spirit of the country itself.

“Corruption has done even more damage to the Croatian national identity, sense of community and solidarity and Croatian culture in general than the damage it has done to the economy, which is unquestionably enormous,” he writes.