A New Israeli Government May Oust Netanyahu Amidst his Corruption Trial

As Israel’s new unity government stands on the precipice of being confirmed as the ruling coalition in the Knesset, things are looking dire for Benjamin Netanyahu, who for the first time in 12 years, stands to lose the powers of the premiership, just as his long-running corruption trial is picking up pace. 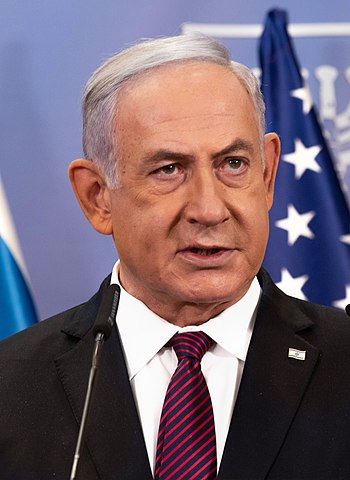 Nertanyahu’s supporters view Bennet as a traitor who abandoned the right to put what they consider a left-wing government in power. (Source: Wikimedia Commons)Parties spanning from the far-right to far-left of the Israeli political spectrum joined together last week to form a broad coalition, united by their desire to oust Netanyahu.

The coalition agreement is the result of Israel's fourth elections in only two years, and Israelis are still waiting with bated breath to see if the government will actually last. Yair Lapid, who leads the coalition’s largest party, the center-left Yesh Atid (There is a Future), was only given the mandate to form a government after Netanyahu, whose Likud party won 30 seats, failed to do so.

If the agreement holds and Netanyahu is ousted from power, he won’t just be losing his job, but potentially his freedom.

Indicted in three of the five cases opened against him, Netanyahu has been charged with deception, breach of trust and taking bribes. Israeli courts began preliminary interviews of witnesses on April 5.

“On the most basic level, he loses a very powerful argument,” Eric Bukatman, an Israeli defense attorney and expert on the Israeli legal system told OCCRP on Tuesday. “He can no longer tell the court that ‘I can’t come to court, because running the country is much more important.’”

“He can’t do that any more. He’s the head of the opposition, but he's not a prime minister anymore, he’s not travelling all over the world. He’s not meeting heads of state, making international agreements,” the attorney said.

If convicted, he could face a maximum of 5 years in prison, according to the Israeli penal code.

Since the coalition was declared last week, Netanyahu and his opponents have traded accusations of incitement with each other, and echoing his former ally in the White House, Netanyahu has begun to publicly question the election’s legitimacy.

This is leading some in Israel to worry whether Jerusalem may see it’s own version of the violence that overtook Washington when pro-Trump rioters stormed the U.S. Capitol on January 6.

Their fanatic support is enough to worry Israel’s internal security service, known as the Shin Bet, which has increased security around far-right leader Naftali Bennett. His far-right Yamina bloc won only seven seats compared to Yair Lapid’s center-left Yesh Atid party, but as part of a deal to bring the right on board, he will serve as prime minister for the first 2.5 years, before Lapid takes over for the rest of the five-year-term.

This is why Nertanyahu’s supporters view Bennet as a traitor who abandoned the right to put what they consider a left-wing government in power.

What worries Bukatman and others in Israel, was not Netanyahu’s legal powers as prime minister, but the cult of personality that has sprung up around him during his combined 15 years in power.

“A lot of Netanyahu’s support is almost cult-like,” Bukatman said. “He’s on a level close to being king of Israel, You have people who think that Bibi can do no wrong.”