Nine European Union member states have failed to meet the January 2020 deadline to introduce centralized registers that make beneficial ownership (BO) information publicly available, while some of those that now have such registers, made them either difficult or expensive to use, or have restricted available data. 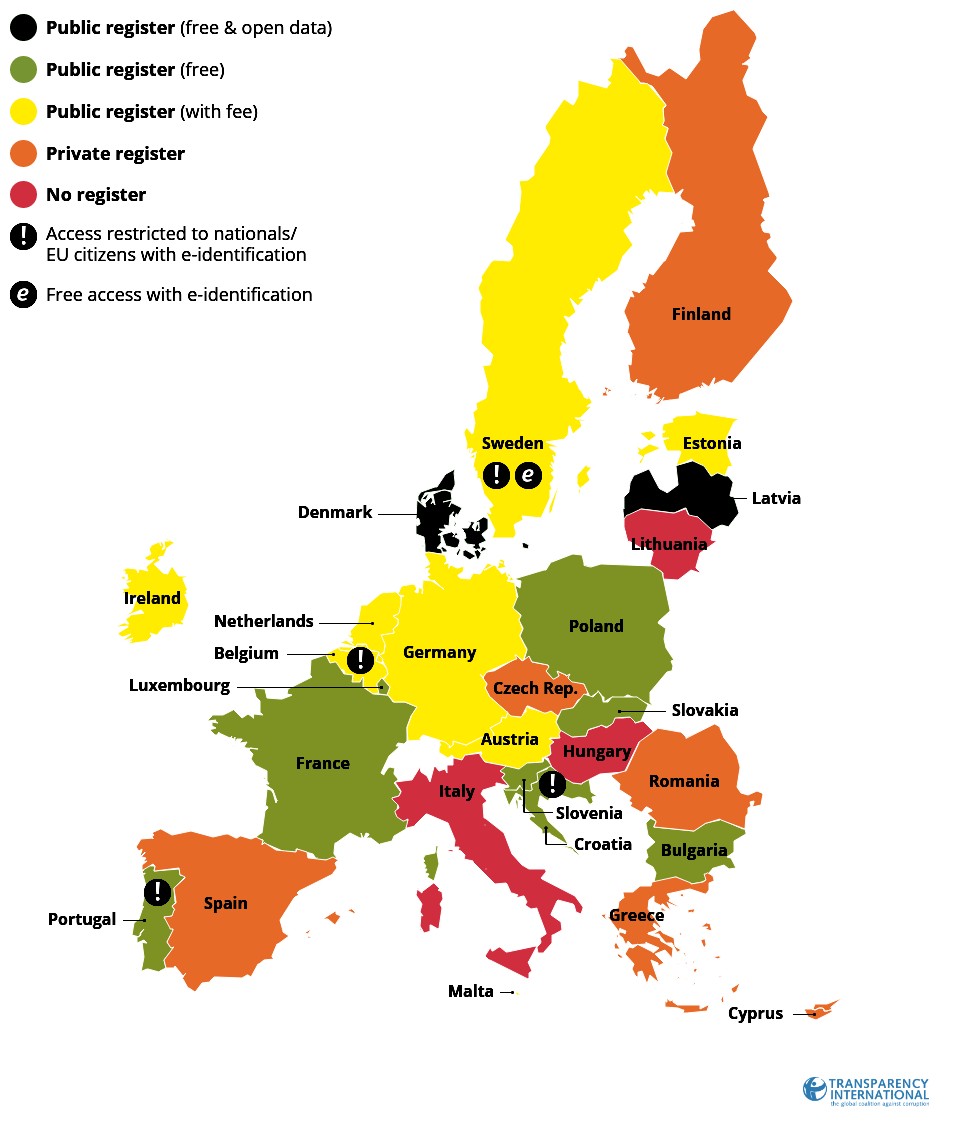 The registers should have been made available in accordance with the EU’s anti-money laundering directive (AMLD), and not having them is in “clear breach of EU rules,” the watchdog said.

Preventing, detecting and prosecuting crimes by revealing the real individuals behind companies used and abused to commit financial crime “depends on the quality of registers and on their usability.”

“It is no secret that anonymous companies are the vehicle of choice for the corrupt and criminals,” TI Researcher and Policy Expert Maira Martini said. “The lack of public registers and the difficulty in accessing information in some Member States tells us that the flow of dirty money is still a real risk for the EU as a whole.”

Cyprus, the Czech Republic, Finland, Greece, Romania and Spain have not yet opened up their registers to the public, while Hungary, Italy and Lithuania do not have any type of centralized register, despite this being a requirement under the 4th EU anti-money laundering directive (AMLD) with a deadline of June 26, 2017.

Even in places where BOs are publicly available, and despite EU directives that insist on transparency, access is often restricted. Ultimately, and as the analysis finds, despite some form of registry in the majority of EU countries, each comes with its own catch.

Some have complex registration systems that require digital identification documents, meaning limited accessibility to non-local entities. In Croatia, for example, while data is theoretically accessible to the public, access to the registry requires e-identification, which is only available to Croatians and citizens of eight other EU countries. Likewise in Belgium, access to the register requires Belgian citizenship, or a Belgian tax number.

Other restrictions include limited functionalities, and restrictive search options that, for example, require the exact spelling as written in the register, or - as seen in Bulgaria - can only be searched in Cyrilic.

Only in five EU countries is it possible to search by both company name and director name, whereas the rest can only be searched either with one or the other. Additionally, only Denmark and Latvia’s registers offer downloadable data in a machine-readable format.

The EU also provides a criteria of core information that public registers should include, such as the beneficial owner’s name, date of birth and country of residence. But TI’s analysis found that “not all countries currently make available the core set of information required by the EU AMLD.”

Experts proposed a number of recommendations EU member states should consider in order to abide by the BO transparency framework. These include collecting and making available and accessible the necessary information to identify a BO allowing users to search, crosscheck, analyse data and identify red flags, providing information on shares and other interests held, improving functionalities, reviewing the EU’s AMLD provisions and clarifying registration requirements.

In addition to addressing all EU member states, the corruption watchdog directly called on the governments of Cyprus, the Czech Republic, Finland, Greece, Hungary, Italy, Lithuania, Romania and Spain “to fully implement the 5th EU AMLD and establish public beneficial ownership registers with a matter of urgency.”