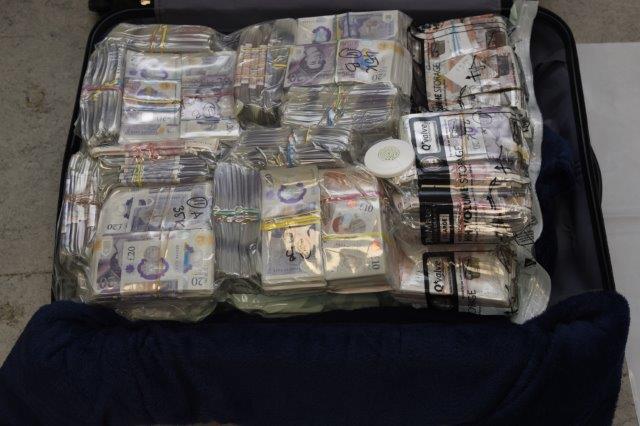 NCA cuts money laundering scheme, with millions of pounds in cash carried between London and Dubai. (Photo: NCA)The agency said that police carried out raids in London, Surrey, West Yorkshire, and Greater Manchester and arrested three men and five women who allegedly hid in their luggage large amounts of cash as they took commercial flights to Dubai from Heathrow or Manchester airports.

“On each occasion the alleged couriers flew out with large amounts of checked in baggage. Days later they would return with fewer cases,” read the statement.

The couriers carried multiple suitcases, with up to half a million pounds in each case, and were likely paid several thousand pounds themselves, the NCA senior investigating officer, Ian Truby, said.

Cash “is the lifeblood of organized crime, as organized crime groups need to launder it so they invest it in further criminality,” he said, adding that the NCA inquiry has discovered millions of pounds of alleged illegal proceeds being flown out of the U.K. to be laundered.

The agency launched the probe into the case after the seizure of some 1.9 million pounds ($2,67 million) from an outbound passenger, a U.K. national, in October last year at Heathrow.

A Czech national was apprehended less than a month later when he tried to board a flight from Heathrow to Dubai carrying 1.3 million pounds ($1,82 million) in his bags, according to the NCA.

Both suspects were charged with money laundering.