Spanish National Police said they dismantled the first illegal 3D-printing gun workshop in the country after investigators detected that a man had purchased parts of firearms and explosive substances online. 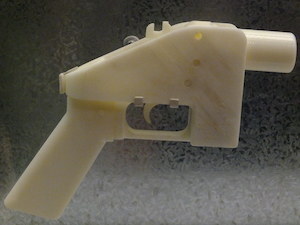 Although some can be primitive-looking, these guns can shoot real ammunition. (Photo: B, Flickr, License)Law enforcement carried out the operation in September last year but disclosed its results this week in a statement. The man was arrested in Tenerife for possessing illicit firearms and explosives.

They additionally confiscated tasers, knives, a machete, a katana, and several objects with supremacist symbolism, including flags with Nazi symbols.

The man reportedly had enough pieces to assemble a 3D-printed handgun. Officials did not say whether the suspect used a plastic or metal 3D printer to manufacture the weapon.

A 3D-printed gun is a firearm with components manufactured by a 3D printer which uses plastic or metal. The weapon is built in a process known as additive manufacturing, which consists of laying down multiple layers following a pattern.

But printing these layers is expensive - the price of a professional 3D printer ranges from US$6,000 to $1 million.

Although some can be primitive-looking, these guns can shoot real ammunition. However, they are not reliable and can get jammed or even blow up in the hand of the shooter if made of plastic.

“Additive manufacturing, known as 3D printing, is a disruptive technology that exponentially increases the danger of the proliferation of firearms, facilitating access to them by criminal or terrorist groups,” Spanish police warned in the statement.

In October 2019, a man killed two people in a terrorist attack on a synagogue in the eastern city of Halle, Germany. The murderer used a homemade shotgun believed to have been manufactured with a 3D printer.

The FBI has warned about the risk these weapons pose, saying that the lack of serial numbers makes these guns untraceable. They’ve also said that 3D printing allows convicted felons to access and produce undetectable weapons.