Campaign promises from beyond the grave, songbird poachers, and the Hollywood actor implicated in a US$227 million scam involving fabricated emails from Netflix and HBO ― your weekly oddities section, from us here at OCCRP’s Daily News team. 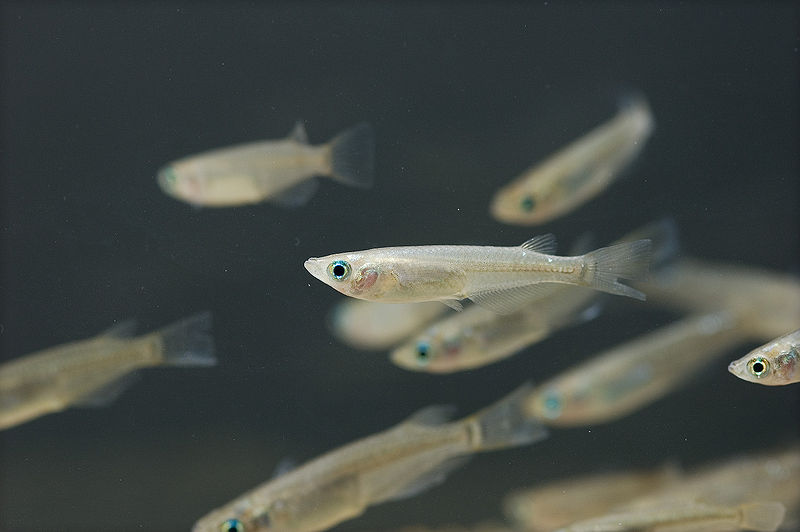 Medaka, or ‘rice fish,’ are the first invertebrate to have successfully mated in space (Photo: Seotaro, Wikimedia, License)Rice fish, otherwise known as medaka, are much sought-after pets in Japan owing to their ability to subsist and reproduce in sub-optimal environments. In fact, they shot to fame in 1994 after becoming the first vertebrate to successfully breed in space.

Now, authorities are searching for a man who last month, armed with two flashlights and a nylon net, broke into a pet shop and made off with about 1.1 million yen ($10,000) worth of the tiny guppies.

Press have speculated that the suspect’s knowledge of the medaka’s value suggests the work of a professional fishburglar. The shop owner was reportedly heartbroken by the recent break-in, saying that he thought of it “more as a kidnapping than a theft.”

Morbid campaigning methods from Mexico this week, where on Thursday a congressional candidate launched his election bid from inside a coffin.

Carlos Mayorga, a lower house candidate from the northern state of Chihuahua, claimed the stunt was a symbolic nod to the 300,000 people murdered since the country launched its war on drugs in 2006, as well as its 200,000-high coronavirus death toll ― one of the worst in the world.

Across the border, U.S. prosecutors have revealed that a deceased tech CEO may have been involved in a vast narco-trafficking conspiracy after investigators suggested that he designed submarine drones for shipping drugs underwater.

Marty Tibbits, the head of Clementine Live Answering Service who died in a plane crash in 2018, was named in an indictment against his alleged partner in crime, Ylli Didani, who’s accused of playing a significant role in a drug-trafficking ring that operated across at least 15 countries, including the United States, Mexico, Albania, and Spain.

Tibbits is believed to have helped the cartel by designing “parasitic submarines,” which work by being loaded with drugs and outfitted with a GPS tracking system before being attached to the hull of larger ships.

Meanwhile in Italy, activists in the northern region of Lombardy are teaming up with local authorities to help track down and apprehend criminals involved in songbird poaching on a mass scale.

It’s a lucrative business: More than five million birds are thought to be trapped and sold by illegal hunters in the region every year, with live specimens fetching as much as 100 euros ($119).

The city of Brescia is a hotspot for this kind of enterprise, with hunters known to use brutal and arcane trapping devices, and local restaurants serving delicacies made out of the illicitly-obtained wildlife despite this being against the law.

Zachary J. Horowitz, a little-known actor who goes by the stage name Zach Avery, made national headlines on Wednesday ― but not in the way most aspiring stars might hope for.

Prosecutors accuse the actor, whose on-screen appearances include the widely-panned thriller flicks Curvature and Last Moment of Clarity, of running a vast Ponzi scheme.

Horowitz is alleged to have used fabricated emails from high-profile production studios and streaming platforms, including Netflix and HBO, to scam investors out of as much as $227 million. Victims were reportedly promised returns of up to 40% on their investments.

The FBI claims that the actor in fact had no licensing deals to speak of, and that he used the majority of these funds for personal enrichment, including the 2018 purchase of a $6.5 million mansion that boasts a pool, wine cellar and gym.

Investigators reportedly said that four Saudis and two Syrian nationals had been arrested as a result of the action, and that the suspects had since been referred for prosecution.