A Colombian court found a former member of a guerilla group guilty of participating in the kidnapping and the murder of a journalist crew and sent him behind bars for nearly 29 years, the country’s Prosecution Office announced on Tuesday. 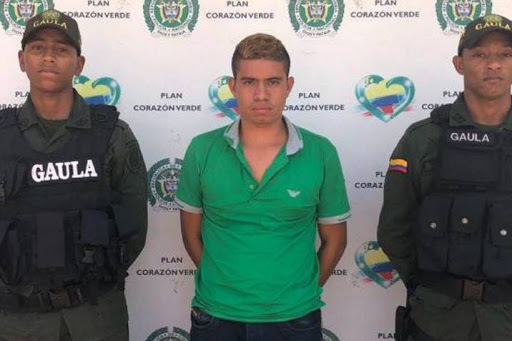 Jesús Vargas Cuajiboy, alias Reinel. (Photo: Colombia's Prosecution Office, twitter)Reporter Javier Ortega, photographer Paúl Rivas and driver Efraín Segarra were reporting for the El Comercio newspaper when they were detained in 2018 in the Ecuadorian province of Esmeraldas by members of “Oliver Sinisterra,” a faction that split from the FARC guerrillas in 2016, the year that rebel group signed a peace deal with the Colombian government.

The court sentenced Jesús Vargas Cuajiboy, alias Reinel, a member of the “Olivier Sinisterra,” to 28 years and 8 months in prison, Javier García Trochez of the Prosecution Office’s organized crimes department said at a press conference.

Reinel guarded the victims during the abduction until alias Guacho, the then leader of the dissident structure, ordered their killing. The bodies of the three were found days later.

Faced with overwhelming evidence, Reinel accepted his responsibility for the murders and appologized to the victim's families from the Cómbita maximum security prison in Boyacá.

In collaboration with other media outlets, the OCCRP published in 2018 a series of stories about the abduction and murder of their Ecuadorian colleagues.