The Russian Federal Security Service (FSB) orchestrated for decades the theft of millions of rubles of oil from trucks and pipelines in the country’s top oil producing region claims a new investigation by Radio Free Europe. 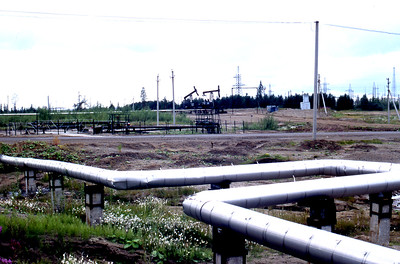 Those who oppose the oil mafia wind up in court or worse, according to Khasov-Cassia. (Source: Flickr.com)With a network of government agencies, judges, private security companies and scapegoats on it’s payroll, the so-called “oil mafia” systematically siphoned oil and gas from transport, reselling it to refineries and targeting those who stood in the way, the outlet reported.

The oil is stolen by directly tapping into pipelines and pumping oil out into trucks, refineries or other containers or by stealing it out of trucks or rail cars during transport. Radio Free Europe reported that these heists are directly overseen by law enforcement, private security firms, or oil company employees who have been bribed to look the other way, or in some cases, help the bandits.

While reports relied heavily on anonymous sources connected to the operation, the investigation included videos and pictures of masked and off camera individuals in wooded areas accessing what appears to be a pipeline. In one video, a black liquid can be seen spurting out of one of the pipes in the woods.

Journalist Sergey Khazov-Cassia who conducted the investigation explained that sources had reason to fear retribution from officials. If sources’ involvement in the investigation was made public, he said they could be put in jail or killed.

“The system is such that if you are arrested and if there is a criminal case that is opened against you there is very little chance that you can avoid being arrested,” Khazov-Cassia told OCCRP on Wednesday.

These videos were labeled as materials from a 2016 documentary exposing the scheme called “Criminal Oil” that reportedly resulted in the arrest and criminal indictment of journalist Eduard Shmonin for libel.

Radio Free Europe reported that material evidence proving the journalist’s innocence was mysteriously lost during the course of the ongoing trial which is closed to media and the public.

Long delays and missing witnesses exacerbated Shmonin’s financial burden of retaining legal counsel Khasov-Cassia said, forcing the journalist to accept an attorney provided by the state who has expressed disdain for his own client.

Those who oppose the oil mafia wind up in court or worse, according to Khasov-Cassia who studied the cases of Shmonin, a police officer and an ecologist who were all subjects of criminal investigations after taking action against the alleged criminal enterprise.

After being convicted for abuse of office and losing his job, Colonel Sergei Zinchenko’s house was set on fire in 2017. Radio Free Europe reported that Zinchenko believed these events were payback for speaking to Shmonin about the oil mafia.

Ecologist Mikhail Karateev was sentenced to four years in prison for stealing pipes, a conviction Radio Free Europe says was based on a falsified case. Karateev reported being tortured while in custody.

“The stolen Russian petroleum is not just stolen from Russian budget, it is stolen from international shareholders as well,” Khasov-Cassia said.