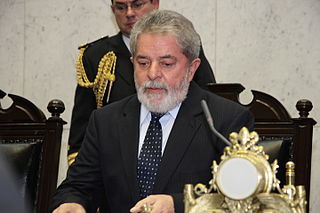 Another case that hasn’t been resolved yet involves Instituto Lula, a non-profit Da Silva founded in 2011 to strengthen relations between Brazil, other Latin American countries and Africa. (Photo: BCNChile, Flickr, License)Da Silva, who ruled the Latin American country between 2003 and 2011, was imprisoned in 2018 after a federal court in the southern city of Curitiba found him guilty of embezzlement and  convicted him for money laundering and corruption in the so-called Car Wash scandal, the biggest graft affair in Brazil’s history.

However, on Monday Supreme Court judge Luiz Fachin dismissed all those rulings, saying they were made by the wrong court.

Fachin will refer the cases involving Da Silva to a federal court in Brasilia. However, Brazil’s Prosecution Office can still appeal Fachin’s decision and prevent the politician from running for office.

Da Silva was convicted in 2017 in two separate cases for allegedly receiving million-dollar properties in Brazil as bribes from local construction firms OAS and Odebrecht - actions that his legal team insist aren’t illicit.

Another case that hasn’t been resolved yet involves Instituto Lula, a non-profit Da Silva founded in 2011 to strengthen relations between Brazil, other Latin American countries and Africa.

Da Silva’s lawyers welcomed the Supreme Court’s decision in a statement, saying that the ruling confirms what they have for five years consistently claimed: that the Curitiba court, led then by former federal judge Sergio Moro, had no jurisdiction over Car Wash cases.

The Car Wash task force - a special group of prosecutors that dealt only with this scandal - became themselves a national scandal after leaked messages published by The Intercept Brasil suggested that Moro, who served as Minister of Justice during President Jair Bolsonaro’s mandate, did not act impartially.

Brazilian prosecutor and former coordinator of the Car Wash task force, Deltan Dallagnol, expressed concerns over the court’s decision to hold Da Silva’s proceedings in Brasilia and called it a setback in the fight against corruption.

“Lawsuits involving the former president will soon resume in Brasília, but with real chances of prescription. Several issues will be rediscussed in the courts. None of this, however, erases the consistency of the facts and evidence, on which the judiciary will have the last word,” Dallagnol wrote on Twitter.