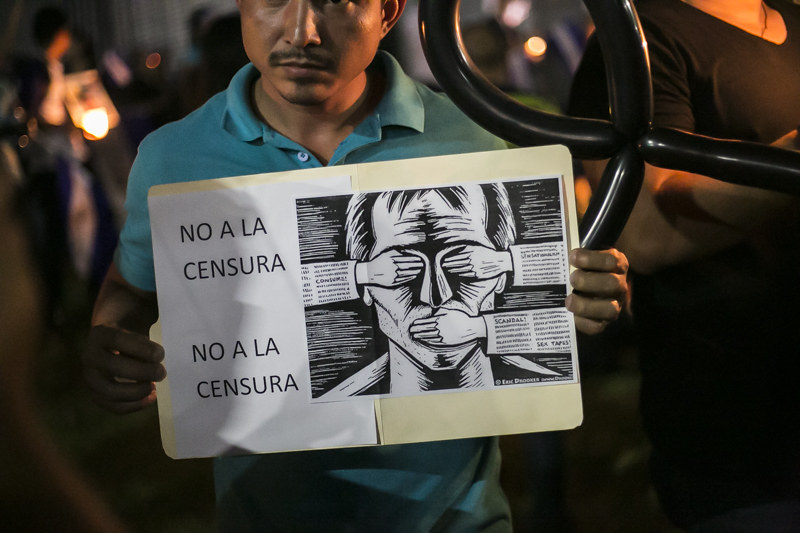 Journalists worldwide demand human rights for their colleagues in Nicaragua. (Photo: Jorge Mejía peralta, Flickr, License)In an open letter, organizations and reporters expressed their solidarity with their Central American colleagues who have endured systematic repression since 2018 when civilians engaged in a wave of civic protests against government policies.

“We ask the democratic governments of the world to exhort and pressure President Daniel Ortega to immediately cease his repressive policies against independent media and journalists,” media workers said in the letter that was published on Monday, when the country was marking  Journalist Day.

The signatories urged international organizations, such as Amnesty International, Reporters without Borders and the United Nations High Commissioner for Human Rights, to visit the country and register the repeated violations against press freedom.

The letter noted last week’s police raids against independent outlets Confidencial and 100% Noticias, the government’s most recent attacks against the free press.

The letter was prompted by the urgent need for independent reporting about the effects of the pandemic in Nicaragua and the country’s general elections in November.

From 2018 onwards, many local outlets have seen their offices illegally confiscated or assaulted by paramilitary groups linked to government officials. Local authorities have also instigated trials against press workers and even imprisoned two journalists, subjecting them to tortures while in police custody.

Police and paramilitaries have physically assaulted, threatened, intimidated, spied, and even killed journalists for doing their work, the letter said. One of the most emblematic cases was the murder of reporter Ángel Gahona in April 2018 while on assignment.

This widespread violence has forced more than 70 journalists to leave the country.

The “Special Cybercrime Law” provides jail sentences for anyone who spreads content that falls under the government’s criteria of false information.

Separately, the “Foreign Agents Law” obliges all individuals and organizations receiving external financing to report their financial situation to the government. The new legislation forced non-governmental organizations advocating freedom of speech in Nicaragua to shut their doors earlier this year.