Before even being published, the updated version of the European Council’s tax haven blacklist has already drawn criticism from politicians, academics and civil society organizations for being overly political and failing to serve its purpose. 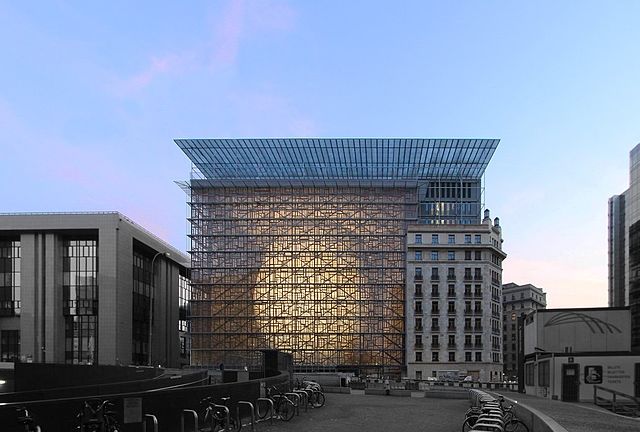 The Europa building in Brussels, Belgium, where the European Council convenes. (Photo: Samynandpartners, Wikimedia, License)The revised list is expected to be published next week, but reports indicate that the small Caribbean country Dominica has been added to it, while Turkey – despite failing to make the EU’s requested changes – was not included.

After repeatedly missing deadlines to exchange tax information with EU Member States, Turkey remained on the “gray list” due to what Paul Tang, Chair of the European Parliament's subcommittee on tax matters, insinuated to be its political leverage.

In a statement on Tuesday, he said that the list is “confusing and ineffective,” and that “political games need to be removed from the listing process so that a country can avoid being listed only through reforms rather than through a diplomatic offensive."

Portugese Finance Minister Joao Leao defended the Council’s decision, saying that member states “were able to make progress in cooperation with Turkey on tax matters, so it was not added to the list.”

His explanation did not convince critics.

Rasmus Corlin Christensen, an economist at the Copenhagen Business School said on Twitter that the EU’s real motivation was the following: “We’re close to Turkey so, despite them objectively qualifying, we’ll do anything to keep them off the blacklist – unlike if it’s a far-off island economy.”

“The EU tax haven blacklist remains a farce,” he added.

Tang also addressed this issue, saying that a lack of transparency over how countries are listed “allows political considerations to trump facts.”

In addition to criticism targeting the political nature of the blacklist, another point of contention is that it does not account for numerous low tax jurisdictions.

After reports indicate that Barbados had also been delisted, Chiara Putaturo, Oxfam’s EU Policy Advisor on Tax and Inequalities, wrote on Twitter that just two out of 31 countries that have low or zero corporate tax rates are now on the blacklist.

She said in a recent statement that the current criteria for blacklisting “captures hardly any real tax havens.”

Although the EU Parliament recently adopted a resolution to reform its blacklisting process, the issue was excluded from the discussion at the Ecofin Council of EU27 economy and finance ministers on Tuesday at the last minute, according to Euractiv.

“The EU list of tax havens has the potential to transform the global fight against tax avoidance. Yet it does not live up to this potential,” said Tang.