Spain’s Guardia Civil last week arrested ten accused of operating a million-dollar pyramid scheme, including the alleged head of the operation who had reportedly posed as the illegitimate daughter of the former King. 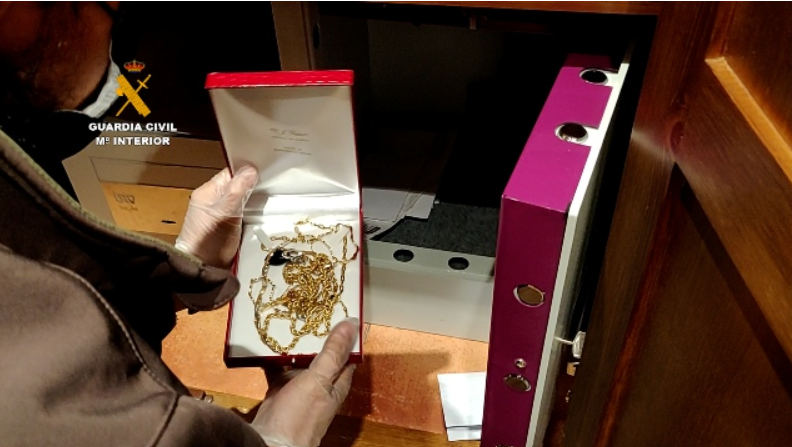 Spanish police also seized luxury jewelry and cash as part of the bust. (Photo: Guardia Civil)The alleged scam involved fake real estate purchases, with members of the group persuading victims to acquire property at a large discount without actually viewing the assets, later providing false proof of ownership and pocketing the cash, the authority said in a statement.

According to the Guardia Civil, members of the organization would routinely use fake or stolen identities, as was the case with the syndicate’s alleged head having reportedly convinced would-be investors of her pseudo-royal status.

The authority claims to have identified more than a hundred victims, each of whom may have been robbed of between US$30,000 and $48,000, with further cases expected to be uncovered in the course of the ongoing investigation.

The group’s alleged leader, who is reportedly confined to a wheelchair, is understood to have been well-known to police, having reportedly already served time for previous offences.

Described as living a luxurious lifestyle with a personal staff of more than 15, authorities stated she used her assumed persona as an heiress to gain the trust of people in her circle and recruit new victims.

As part of the operation, the Guardia Civil also seized €60,000 ($72,000) in cash, luxury vehicles, electronics and jewelry valued at $60,000, along with ten bank accounts allegedly used to launder more than $1.8 million in criminal proceeds.

The group reportedly also used a law firm in the province of Alicante as a front company in managing the scheme.