A Lebanese activist and Hezbollah critic was found dead in his car on Thursday morning with five gunshot wounds in his body, according to local media. 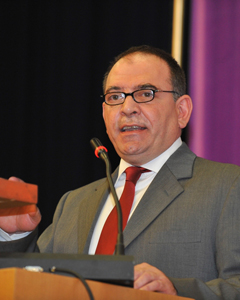 Lokman Slim (Photo: Footloop, Wikimedia, License)Lokman Slim, 59, was a leading Shi’ite publisher and activist who often criticised pro-Iran Hezbollah’s intimidation tactics and intolerance to opposing views. His death is the first of a known activist in years.

The Beirut-based Samir Kassir Foundation (SKeyes), a center for media and cultural freedom, called on Lebanese authorities to “for a change prove their seriousness in revealing the circumstances of the murder” in a transparent manner.

“Any dilution of the crime, obliterating its facts and simplifying its horror, like dozens of assassinations that silenced voices and free pens, all fall under the category of contributing to the crime, and colluding with and protecting the killers,” said SKeyes.

Slim had been shot four times in the head and once in the back when he was found in Hezbollah-dominated southern Lebanon.

Several Lebanese journalists and activists said they saw the assassination as an attempt to silence dissent.

“Let the authorities go and find the murderer immediately, otherwise they are as criminal as  those who gunned down Lokman,” one Twitter user said.

"He had a political stance, why else would he have been kidnapped," Slim’s sister Rasha al-Ameer told AFP.

Lebanon’s caretaker interior minister told local media Slim died in a “terrifying crime” and pledged to pursue the case, which he called an “assassination”.

A 2019 statement in which Slim said he was receiving threats from Hezbollah, the country's most powerful political and militant group, began circulating on social media after the news of his death broke earlier in the day. In his statement, he also called on Lebanese police and the army to protect him from the Iran-backed group which the U.S. designated a terrorist organisation.

Hezbollah condemned the killing late Thursday, and asked the judicial and security authorities to “work quickly to expose the culprits and punish them”.

The UN’s Special Coordinator for Lebanon, Jan Kubis, urged authorities in a statement, that “this investigation must not follow the pattern of the Beirut port blast investigation that 6 months on remains inconclusive and without accountability. People must know the truth.”

Angry Lebanese protesters have last week taken to the streets to call for an end to corruption, incompetence and impunity.

The government must do more to “heed the recommendations of the international community and do much more to fulfil, respect and protect human rights, putting an end to impunity underpinning the drastic erosion of fundamental economic, social and civil rights,” the watchdog said.