The U.S. financial services company Robinhood, which serves as a trading platform for millions of users, is under fire amidst claims that it froze the purchases, and even forced the sale of customers’ stocks that have seen an unprecedented surge in value. 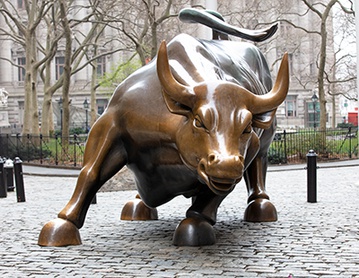 The controversy involving Gamestop shares and trading practices of Robinhood have led a more widespread cogressional hearing on market manipulation practiced by firms on Wall Street. (Photo:Attribution-ShareAlike 2.0 Generic, CC BY-SA 2.0)A class action lawsuit was filed against the company on Thursday, and politicians from across the  aisle have lambasted the company and suggested the launch of an investigation looking into claims that they manipulated the market and cost their customers millions in the process.

“This is unacceptable,” wrote Democratic congresswoman Alexandria Ocasio Cortez on Twitter, who said that she would support a hearing looking into Robinhood’s actions. Ted Cruz, one of the country’s most conservative senators, said that he “fully agreed” with this assessment.

The controversy unfolded after a group assembled on the social media platform Reddit to coordinate the widespread purchase of stocks in the company Gamestop, a video game retailer, after it had been targeted by the investment management company Melvin Capital, which had invested large sums of money betting against the stock.

Due to a massive uptick in the Gamestop’s value – which grew to become a Fortune 500 company in a matter of hours – Melvin Capital lost billions, and relied on large cash bailouts from Robinhood’s largest customer, Citadel Securities.

Robinhood, which gets paid millions from Citadel in exchange for sharing trading information with the hedge fund, subsequently blocked the purchase of Gamestop stocks, amongst others, and some reports even indicate that they forced the sale of shares in the company without the consent of their clients.

“Amid this week’s extraordinary circumstances in the market, we made a tough decision today to temporarily limit buying for certain securities,” Robinhood wrote in a company statement.

It added that this was a “risk-management decision,” and denied making the decision to benefit the companies they route information to, saying that they were following requirements that “protect investors and the markets.”

Democratic Senator Elizabeth Warren said that companies like Robinhood appeal to customers by offering prizes for them to join, but also ask them to sign an arbitration clause, which ensures that they cannot hold the company liable if they do not protect their interests.

“If it turns out that if we [Robinhood] really did cheat you, it will never be made public, there will be very little you can do about it,” she said of the company’s tactics, adding that this “doesn’t create a healthy market.”

The latest lawsuit against the company, which is reportedly being assisted by an app that streamlines the process of helping those affected to join, alleges that “Robinhood’s actions were done purposefully and knowingly to manipulate the market for the benefit of people and financial intuitions who were not Robinhood’s customers.”

“Robinhood’s official Twitter account stated: “Let the people trade.” They have since disregarded their mantra and have blocked access for millions of its customers to trade particular securities,” the lawsuit said.

This is not the first time allegations against the company have been made. Last month, the U.S. Securities and Exchange Commission (SEC) charged the company for “failing to satisfy its duty to seek the best reasonably available terms to execute customer orders,” which led to a US$65 million settlement.

Aside from allegations targeting Robinhood, this episode has also drawn criticism of the U.S. stock market as a whole.

“People on Wall Street only care about the rules when they’re the ones getting hurt,” said Senator Sherrod Brown, who will be serving as the Chair of the Senate Banking and Housing Committee.

“American workers have known for years the Wall Street system is broken – they’ve been paying the price. It’s time for the SEC and Congress to make the economy work for everyone, not just Wall Street,” Brown said in an announcement that he would be calling a hearing on the current state of the stock market.