Pirates killed one and kidnapped 15 crew members of a Turkish cargo ship on Saturday in the latest attack on vessels sailing off the coast of West Africa -- the most dangerous region in the world for piracy. 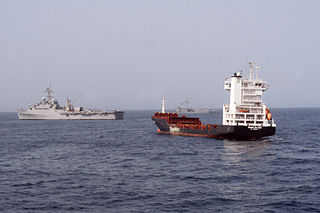 Over the past year, the Gulf of Guinea has far outpaced the Horn of Africa as the most dangerous region in the world for maritime piracy. (Photo: DVIDSHUB, Flickr, License)The kidnapped crew members are Turkish citizens while the murdered man was from Azerbaijan, the Turkish government reported.

The attack came just days after Maersk, the world’s largest shipping company, called on local authorities to employ expanded security in the region.

“It is unacceptable in this day and age that seafarers cannot perform their jobs of ensuring a vital supply chain for this region without having to worry about the risk of piracy,” said Aslak Ross, Maersk’s head of marine standards, according to Dryad Global. “The risk has reached a level where effective military capacity needs to be deployed.”

According to the Turkish government statement, the captured crewmen were working aboard a U.S.-owned, Turkish-operated and Liberian-flagged vessel named Mozart, when they were set upon by pirates in the early hours of Saturday morning as they made their way to Port-Gentil in Gabon.

Over the past year, the Gulf of Guinea has far outpaced the Horn of Africa as the most dangerous region in the world for maritime piracy, OCCRP reported this summer.

Among the many reasons is the complex web of jurisdictions which leave response times slow and block shipping companies from keeping private armed security aboard their own ships.

Some 20 nations line the gulf’s 6,000 miles of coastline, many of whom are beset by high rates of corruption and weak rule of law, making international cooperation difficult.

“From a seafarers point of view, who has been attacked and his ship boarded, these definitions don’t really make a difference,” said Cyrus Mody, assistant director of the International Chamber of Commerce’s Commercial Crime Services division which oversees the International Maritime Bureau told OCCRP in April 2020. “But they are extremely important when affecting a response to an attack.”

Any attack which happens in a particular nation's territorial waters can only be responded to by that nation's law enforcement, unless they give specific permission for others to intervene.

An attack in international waters, however, can be responded to by any capable naval entity in the region.

But most ships don’t spend all their time in international waters and the countries lining the gulf largely don’t allow the shipping companies to enter their territory with private armed forces.

In West Africa, the crews are also particularly at risk, as they are often more valuable, or at least, more movable than the cargo.

According to a recent report by Reuters, some 130 crew were captured in at least 22 separate incidents in 2020. Overall there were more than 50 reported attacks on ships in the gulf in 2020 alone.

The agency said that Turkey has not yet received any ransom demands from the pirates.

Most often, the pirates come from Nigeria’s impoverished Niger Delta region, where many local fisherman have turned to piracy after the oil and factory fisheries have decimated the local maritime industry.

“They do come from areas of extreme poverty and extreme corruption, where they have probably lost jobs and their skills are maritime skills,” Mody previously told OCCRP. “So what they do is go out and steal from other ships.”

While it is not easy to hide a large oil tanker or other ship in West Africa’s jungles, it isn’t particularly difficult to hide small crews which have been kept in makeshift pirate camps for weeks or even months as their captors negotiate with shipping companies and their insurance agencies for acceptable ransoms.

Turkish media reported that the country is already planning a rescue operation.