Bosnian Parties Use Public Funds in their Election Campaigns

Political parties in Bosnia and Herzegovina have spent at least 5.9 million convertible mark (US$3.55 million) on campaigning ahead of local elections on Sunday, often misusing public resources, an international watchdog warned on Thursday. 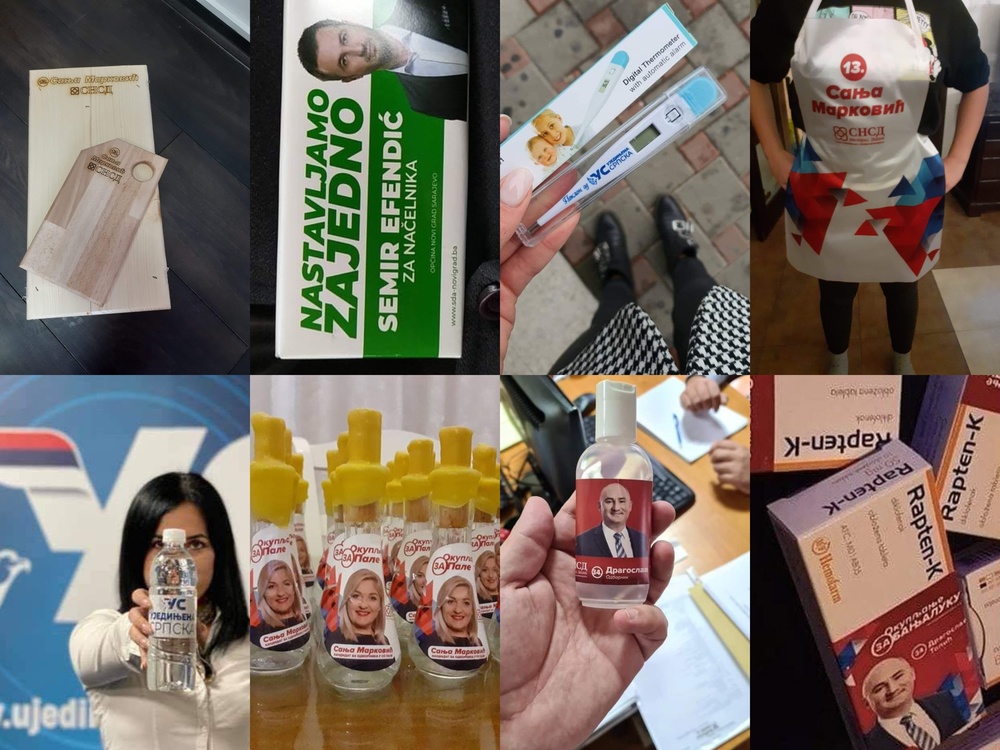 Politicians faces, party logos on chocolates, painkillers, disinfectants... everything to attract potential voters. (Photo: Buka, social networks)Nearly 3.3 million citizens of Bosnia and Herzegovina will be voting for 30,789 candidates running for mayors or for seats in local (city) assemblies of 143 municipalities.

Despite a pandemic-related ban on mass gatherings, Transparency International said its monitors “have so far attended 974 rallies of different political parties and reported that in 140 cases the parties were distributing presents to their potential voters,” including PCR tests, disinfectants, face masks, body temperature thermometers, even painkillers or sweets with party logos or smiling faces of candidates on the boxes.

In 2,481 cases, according to TI, political parties have used taxpayer’s money or public resources for their promotion and the promotion of their candidates.

“The most cases of such misuse refer to intensified public works, in 983 cases, out of which 46 percent occurred over the last month,” such as reparations of roads and other local infrastructure.

TI has also noticed that local authorities or public companies were hiring billboards, then letting political candidates use them for their promotion.

In at least 32 cases political parties (mis)used public utility companies whose workers were ordered to put up political posters or organize political rallies during working hours. About 270 times during this campaign, parties have distributed public funds as subsidies or financial incentives to their potential voters, mostly pensioners and farmers.

In an attempt to attract as many voters as possible, some parties organized even free medical checkups, medicines or discounts to some public services.

Among the most bizarre cases TI reported were those of the mayors of the towns o Doboj and Bijeljina, who are running again for their posts and who together with other members of their party organized free mammography tests which the men personally attended.

The 2020 Bosnian municipal elections are scheduled for November 15, to elect mayors and assemblies in 143 municipalities across the country.

Some $1.32 million parties spent on public advertising in local electronic or print media, while some $2.23 million went on billboards of numerous sizes, according to TI.

The sum should be added costs of the internet advertising, preparation and printing of the promotional materials, as well as costs of pre-election rallies held despite numerous warnings about the critical situation with the COVID-19 situation in the country.