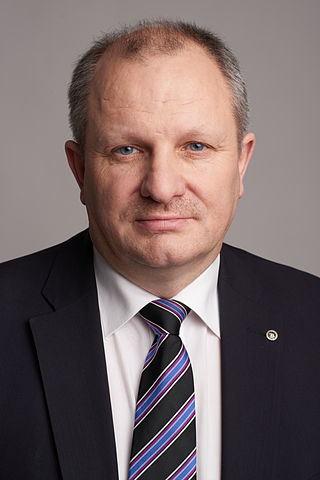 Kestas Komskis, the former deputy speaker of the Lithuanian parliament. (Photo: Nc0de, Wikimedia, License)Komskis, who is now a council member in his home town of Pagegiai, is suspected of helping engineer the intentional downfall of Agrolira, a construction company he ran with his son Algirdas. Father and son are suspected of driving the company to bankruptcy and wasting its assets, the Prosecutor General’s office confirmed to Siena.

In February, Siena launched an investigation of Agrolira’s bankruptcy. The probe revealed that Komskis’ business, untilrecently one of the biggest employers in Pagegiai, collapsed within months. A day before the first ruling on bankruptcy, the company registered three new shareholders. The three men are local workers from Pagegiai, all of whom worked for Agrolira or other businesses owned by Komskis. When Siena’s reporters met the new shareholders, the three claimed they never received any shares.

Back then, Komskis claimed the company went bankrupt due to a tragedy. In February 2019, a Lithuanian court ruled the company must pay nearly €100,000 (US$118,200) in compensation to the relatives of a car crash victim. A young man was killed in an accident caused by Agrolira’s drunken driver, who was driving from work with a company car. Two small  children lost their father, and Agrolira was found responsible, along with the driver.

However, it was soon apparent that Komskis’ company failed to pay most of the compensation to the victims. The company’s road to bankruptcy began shortly after the court ruling. Within months, the family learned there was no money left to recover.

Simultaneously, Komskis began a new business venture that happened to specialize in construction works - just like Agrolira. The new company, Kalibrus, soon became the biggest construction contractor for the Pagegiai municipality, where Komskis is a council member and his brother runs the administration. Unlike Agrolira, the new company has no obligations to the family who lost their loved one.

When Siena’s journalists investigated Kalibrus, they established that Komskis’ new company won at least one tender by providing false information. The company stated it conducted major works in the Lentvaris manor, an impressive piece of Lithuania’s cultural heritage. However, both the company in charge of the manor’s restoration and the manor’s owner said Kalibrus did not work on the manor.

Lithuanian law enforcement launched two criminal cases after Siena’s stories. Last spring, a case was opened to investigate Agrolira’s bankruptcy. In September, a new case was launched on fraud allegations, based on the manor story.

In Agrolira’s case, both Komskis and his son, the company’s former director, were charged, the Prosecutor General’s office confirmed in a written statement. If convicted, father and son could face up to seven years in prison. The manor case, launched  in September, is still in the early stages.